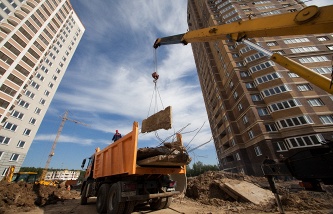 MOSCOW, January 26. The average price of one-bedroom apartments on the secondary housing market in Moscow in the conversion at the current exchange rate is $ 92,2 thousand. Last time claimed the average price “odnushki” in Moscow in the dollar equivalent dropped below the symbolic level of $100 thousand in January 2006. This follows from the report of the analytical center “Inkom-real Estate”.

The decrease of the Russian currency in January 2016 has led to the fact that the average dollar cost figures in the Moscow secondary housing market fell to the minimum values, the report said.

The average offer price in this segment, expressed in dollar equivalent at the exchange rate ruling on 26 January 2016 (77,80 rubles per $1), $2400 per square meter in absolute terms, this is the lowest since November 2005.

In January 2016 for the first time in 10 years, the average price of an apartment in Moscow fell below the symbolic level of $100 thousand.

By data “Inkom-real Estate”, now in the secondary housing market of Moscow, submitted to sale of 10.3 thousand one-bedroom apartments. The average total area of objects of the indicated category and 40 square meters. The average offer price – 179,4 thousand rubles per square meter or to 7.18 million rubles for the apartment.

From the calculation of the official rate of the Central Bank of the Russian Federation on 26 January, the average declared value specified categories of assets, expressed in dollars, is $2306 per square meter or $92,2 thousand.