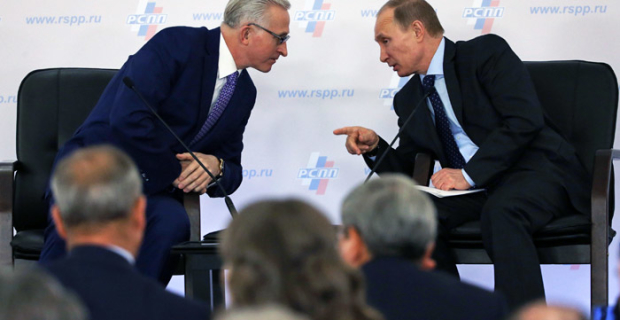 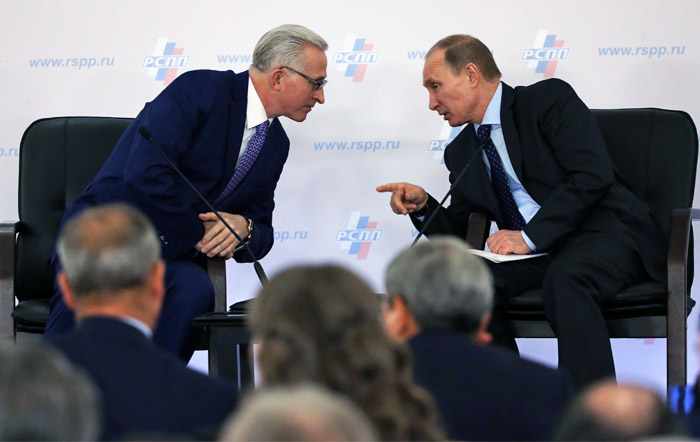 Moscow. 15 February. President Vladimir Putin proposes to create a mechanism for dialogue between business and law enforcement authorities with the mediation of the Kremlin administration.

During the meeting with the head of the Russian Union of Industrialists and entrepreneurs (RSPP) Alexander sechinym the President noted that the relationship between business and law enforcement is a delicate issue and, to date, such a dialogue is greatly needed.

“The proposal is that at the site of the presidential administration to build a dialogue between business and law enforcement field, but not direct, but mediated the presidential administration, so as not individual companies, not individuals or even individual legal entities formulated their claim and request, and to associations of entrepreneurs, say, RSPP, TPP, “Business Russia”, “OPORA Russia”, on the one hand, and such departments and agencies as the General Prosecutor’s office, interior Ministry, FSB, the Investigative Committee, say, at the level designated by the Deputy Minister, you could at least once a quarter with the mediation of the President’s administration to hold meetings and to detect subtle places, and things that are bothering, on the one hand, the law enforcement system, on the other hand – the business community”, – said the head of state.

According to Putin, it is necessary to develop normative acts and law enforcement practice after the adoption of these acts consistent with the interests of the state as a whole.

Shokhin agreed that this would be a very effective tool.

Synchronization of changes to the criminal code and the administrative code

Putin also said that the processes of humanization of criminal legislation and update the administrative standards must be synchronized, and need to watch closely the situation didn’t worsen.

Shokhin at the meeting expressed the view that the new administrative code contains “overly accusatory bias”. According to him, on the one hand, if the humanization of the Criminal code, the punishment part will go in the administrative field, then this increased responsibility in the Administrative code are justified.

In particular, according to him, currently significantly increase the period of limitation for offences, penalties, there are new penalties, such as the elimination legal entity. These stiffnesses, said Shokhin, will be justified only in the case of these penalties from the sphere of the Criminal code.

“But in parallel we need, apparently, to solve these two problems and not to delay the adoption of new legislation, relatively speaking, by the summer, as many MPs want,” said Shokhin.

Putin in this matter agreed with him.

Shokhin also proposed to analyze the law enforcement practice in connection with the provision of the investigating authorities the right to initiate criminal cases on tax crimes. If suddenly it will appear, that will increase dramatically the number of tax cases with little result, then, according to him, it will be necessary to correct this practice.

Private pension funds can play a key role in the upcoming big privatisations, if the government will not adopt new decisions to freeze cumulative component, said Shokhin.

“We understand that the market price of many assets are currently quite low, and if will involve some major business organizations, which, for example, previously participated in the privatization, there may be questions. But if will involve pension funds, if we are not going to freeze the cumulative part of the pension and also let her in this process, the fact that now not the high price (although, of course, for the current budget problems it’s not great), the long term can give very good result in the improved sustainability of the pension system,” – said Shokhin.

According to him, the RSPP was proposed such a design in 2009, but in previous crisis “were found other possibilities since the Reserve Fund was large enough.

“Now it seems to us that linking privatisation with pension reform strategy is very profitable and in social terms, the scheme, and the business as a minority partner could participate in such structures. At the same time could be involved and foreign sovereign wealth funds on the line, for example, the Russian Fund of direct investments”, – said the head of RSPP.

“That is such a complex design, but the center of this nucleus should be the pension system. NPF can be very effective not only for 2016, but in the medium term”, he added.

Russia in 2016 could sell some major assets to reduce the budget deficit. In particular, we are talking about the part of the state “Rosneft”, “Bashneft”, “ALROSA” and other companies. SPC have been active participants in those few transactions on the Russian capital market, which took place in 2015, a major role in the privatization they still did not play as large market shares in recent years.

Putin responded to the proposal concluded that “the participation of pension funds in the privatization process, of course, also in demand and can be interesting”, therefore this question should be elaborated.

Administration of contributions to social insurance

Business associations can take over the administration of contributions under the social insurance system, said the head of RSPP.

“Special issue of insurance payments in social off-budget funds. Here, on the one hand, we agree that it is necessary to administer, may be more effective, but what we fear in the business community? We fear that through the prism of the ease of administration of insurance payments can be increased real burden on business, fiscal burden,” said Shokhin.

“In particular, if fixed thresholds, because now with the higher wages employers pay less for their employees to the Pension Fund, so if these thresholds will be eliminated, thus simplifying, of course, the administration, the load will actually grow. We felt that if the thresholds are eliminated, we will have the total contribution to the Pension Fund and the social insurance Fund to cut somewhere in the 2.5-3% that did not change the tax burden”, – he noted.

At the same time, the RSPP believes that where possible, it needs insurance principles to keep. Moreover, such types of insurance as insurance against accidents and occupational diseases, it is also possible to transfer from the jurisdiction of state-level social partnership, Shokhin said, adding that the trade unions support this idea.

“I would also like to note that when talking about the responsibility of employers, not only are we ready to take responsibility on management of Fund of social insurance of occupational diseases and accidents on production, but in particular, and a number of other functions, employers can take”, he added.

Putin in his turn noted that the proposals of the business community will be worked out with the government.

“Alexander, I think all the suggestions You made, interesting. Carefully, of course, to deal with this. Know that the Finance Ministry supports the idea of systematization of non-tax payments, and this requires special attention, of course, from the government and the business community. I hope that in this direction you will work together, as already established the practice of working on such issues of interest to the business and belonging to this sphere”, – Putin said.