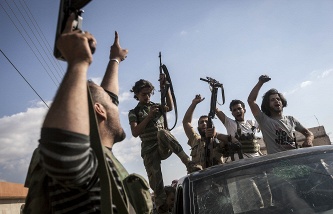 MOSCOW, March 13. The cessation of hostilities in Syria was violated 29 times per day. This is stated in the information Bulletin of the Russian Center for reconciliation of the warring parties in the Syrian Arab Republic.

“During the day, the cessation of hostilities was violated 29 times (Latakia – 18, Damascus – five, Aleppo – three, Idlib – two, ham is one). In Latakia province by unidentified armed groups from mortars and heavy machine guns fired on the positions of government troops in the area of the settlement Karamanli”, – stated in the document published today on the website of the Ministry of defense of the Russian Federation.

In addition, claiming to be opposition to the formation of “Ahrar al-sham” was subjected to mortar attacks against settlements How-kharaba and Leptin in Eastern ghouta (Damascus province).

“As a result of continuous shelling from mortars and artillery systems militants “Jabhat EN-Nusra” in the provinces of Damascus and Idlib, 10 people were killed and about 30 wounded,” – noted in the Bulletin.

Twice fired from mortars and artillery systems, a crude way by the Kurdish people’s self-defense detachments in the neighborhood of Sheikh Maqsood (Aleppo).

The Russian center also confirmed that on March 12 in the area of the settlement Cafer-Nbud (province of Hama) using MANPADS was shot down by a fighter of the Syrian air force MiG-21 which was carrying out flight to control the airspace.

As noted in the Bulletin, the task force of the Center for reconciliation, launched in Aleppo province, have begun to monitor compliance with the cessation of hostilities and the monitoring of the humanitarian situation.