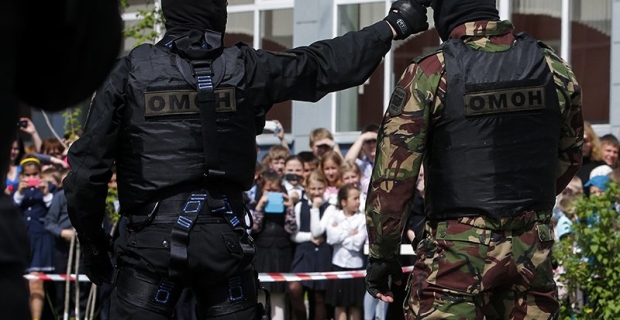 The total number of national guard will be determined by the President, but the source of “Interfax” assumes that it will be around 350-400 thousand people: 170 thousand internal troops, 200 thousand private security. About 30 thousand people are in the units of the OMON and the SOBR, said the source in law enforcement bodies.

The mobile units of special purpose were created in 1988, when it increased the likelihood of riots. The number of units was not disclosed. Squads of Riot police are deployed on a regional basis and subject to local police departments. 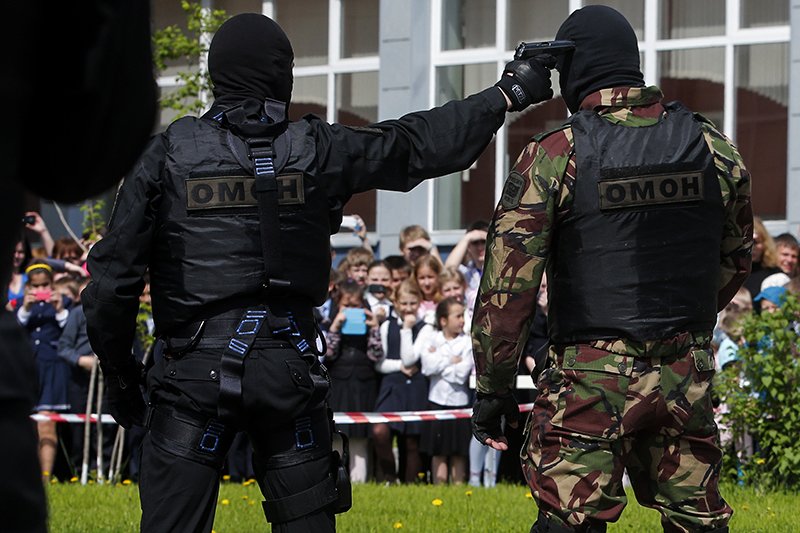 OMON. Special mobile squads (OMON) were established in 1988. Riot police are attracted to security at public events, as well as in hot spots. Riot policemen are trained, they are better armed cops. The number of units of Riot police was not disclosed. According to a source in law enforcement bodies, in the units of the OMON and SOBR are in total about 30 thousand people. Photo: riot policemen take part in a lesson of Patriotic education in the school of St. Petersburg.

In 2010, the magazine The New Time wrote about the men of the second battalion of OMON of the Moscow police Department, which has complained to Dmitry Medvedev, former President, the unbearable working conditions. According to the magazine, the leadership of the battalion was put before subordinates plan to detentions per shift, and used soldiers for the protection of elite cottages and “protection of prostitutes”. Later, the magazine wrote, the heroes of publications were pressured. Vladimir Kolokoltsev, who was the head of the Metropolitan police, claimed that a service check has not confirmed the facts stated in the article.

One of the largest squads of Riot police is “bison”. It was established in 2006 on the basis of OMON GUVD of Moscow region. The unit is about 2.5 thousand people. “Zubr” was provided by the order to “March of dissent” in Nizhny Novgorod, Ryazan and Moscow. In 2011, criminal proceedings were instituted against gangs involved in kidnapping and extortion. The structure of the group consisted of fighters of “bison” and henchmen of crime boss Hakob Meliksetyan, who was regarded as an associate of the thief in law Aslan Usoyan, nicknamed Grandpa Hassan. 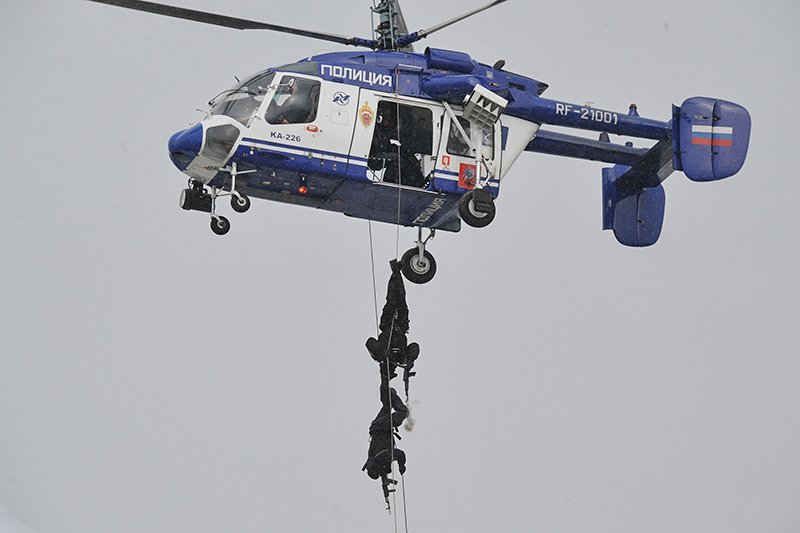 “Zubr”. Detachment “Zubr” was created on the basis of the Moscow OMON in 2006, reports directly to the Minister of defence. “Zubr” was provided by the order to “March of dissent”. In 2011 against several soldiers of the detachment was prosecuted for kidnapping and extortion. Photo: demonstration exercises of detachment “Zubr” in Shchelkovo, near Moscow, 2011.

In 2013, the detachment “Zubr” took part in operation on capture of the “Belgorod shooter”.

The functions of most special forces now largely overlap, noted in conversation with the Deputy Chairman of the Duma Committee on security Ernest Valeev. “The difference is that they were created at different times in different structures. Sabry was created with the RUBOP as special units that were supposed to support actions to combat organized crime. SWAT was created at the Ministry of interior before Assembly, when organized crime was not yet.” 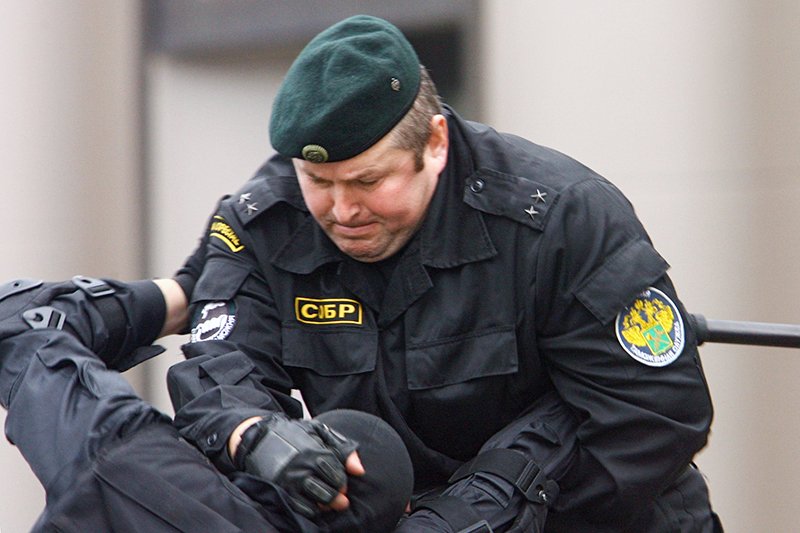 SOBR. Special rapid response units (Sorry) were formed at the RUBOP (regional administration on fight against organized crime) as special units that were supposed to support the actions of employees RUBOP. In October 2013 SWAT participated in the detention of Orkhan Zeynalov, who is later convicted of the murder of a resident of the Metropolitan area of West Biryulevo Egor Shcherbakov. This crime sparked riots. Photo: demonstrations sobrovtsev.

The predecessor of the Special rapid response unit was formed in 1978 by a Detachment of militia of special forces at the Moscow police Department. The modern name of SWAT he received in 2012 after several renames.

In October 2013 SWAT participated in the detention of Orkhan Zeynalov, who is later convicted of the murder of a resident of the Metropolitan area of West Biryulevo Egor Shcherbakov. This crime sparked riots and led to clashes with the police. After the capture Zeynalova SWAT fighters brought the suspect to the Minister of internal Affairs Vladimir Kolokoltsev.

Groups of special forces (core) were in structures of correctional institutions and in the internal troops. “The national guard will unite these different parts that perform the same functions,” — said Valeev.

Know about a half dozen special forces groups. DOS located in Moscow, Novocherkassk, Khabarovsk, Kemerovo, Chelyabinsk region and in the North Caucasus. The 604-th red banner special purpose center, formed from the centers of the “Vityaz” and “Rus”.

“Knight”, in particular, participated in the storming of the Theatrical center on Dubrovka hostage in 2002, wrote the observer of “Novaya Gazeta” Anna Politkovskaya.

Moscow “Peresvet” was created in 2006 to preserve order in the capital. “The creation of the group due to the fact that the capital has to be <…> another unit to participate in mass events”, — explained its creation in 2006, commander of internal troops Colonel General Nikolay Rogozhkin.

Squad “Vyatich”, located in the town of Armavir, Krasnodar region, took part in the second Chechen campaign. In 1999, novolakskoe district of Dagestan “Vyatich” has attacked the militants and air strikes by Russian air force, resulting in sustained heavy losses (according to different estimates, from 23 to 80 people). In the Caucasian campaigns participated center “Rosich” and “Edelweiss”.

46-th Separate brigade of operative purpose VV the Ministry of internal Affairs of Russia is considered one of the largest in the part of internal troops, including units that are equipped according to their nationality is Chechen battalions “North” and “South”. Their total number, according to “Novaya Gazeta” does not exceed 2 thousand persons.

The battalion “North” was formed in 2006. Its members included former insurgents who switched after 2003 on the side of Ramzan Kadyrov. 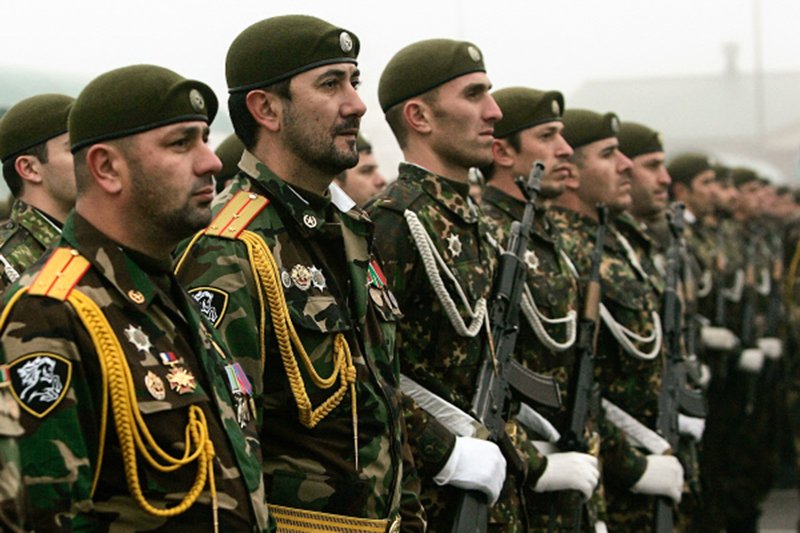 The battalion “North” is directed by Alibek Delimkhanov, the brother of state Duma Deputy Adam Delimkhanov, which Chechen leader Ramzan Kadyrov names his successor. In the battalion he served muhudinov, of which the consequence considers as the organizer of the murder of Boris Nemtsov. An officer of the same division was Ruslan Eremeev, which lawyers for the relatives of opposition is considered the real organizer of the assassination. In the battalion have served and those who are in TFR called the perpetrators is killed during the arrest of Beslan Savanov alleged killer and Zaur Dadaev.

The regiment of private security of objects of oil infrastructure in the Chechen interior Ministry has about 3 thousand people. In 2003-2006, the unit was directed by Delimkhanov. According to the “Memorial”, the regiment was financed by the company “Grozneftegaz” subsidiary company “Rosneft”. Human rights activists have repeatedly accused soldiers of “the oil regiment” in the abduction and torture of Chechens.

The inclusion of troops of the national guard forces that were still in the structure of the Ministry of internal Affairs, will allow them to spend more time improving their professional skills and more clearly allocate responsibilities among themselves, the Deputy-the United Russia Mikhail Starshinov. “SWAT units and Riot police were structures, but performed strength function. Now they turn to the security forces and the interior Ministry will remain units that are engaged in operational work”, — he explained.

Sees no reason to leave various special forces and a former Deputy Chairman of the Committee for security Gennady Gudkov. “Sense to keep them different names, symbols, etc., because the functions they were the same, and now they teamed up,” he says in a conversation with .

Doesn’t agree with him a lawyer, former investigator of the Ministry of internal Affairs Vladimir Zherebenkov. According to him, units such as SOBR, “Zubr”, the riot police, do not need to unify. “Each of them carries out its tasks: “the pennant” is the fight against terrorism, “Zubr” — safety in the colonies, OMON — order during public events”, — said the lawyer. Different specificity of work requires a narrow-purpose specialists, says Zherebenkov, unification can result in a lower level of professionalism.

According to counsel, the government too was keen on reforming the judicial system. “The militia was renamed the police, and nothing has changed, only money spent rebranding,” says the lawyer.

With the participation of Farida Rustamova, Anastasia Mikhailova, Maria Makutenas