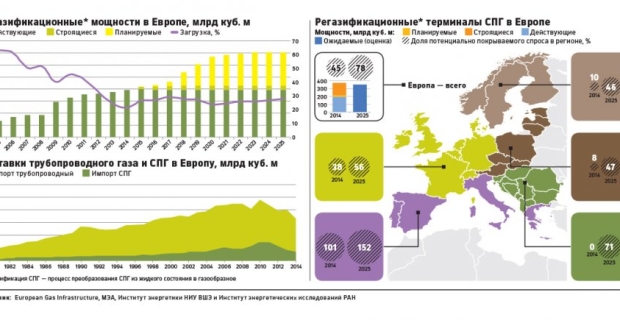 At the end of last week the first tanker of liquefied natural gas (LNG) with capacity of 98 thousand tons of gas (about 133 million cubic meters) departed from the United States (Louisiana) in Europe (the first reported the newspaper the Wall Street Journal). Ship called the Creole Spirit should arrive to the shores of Portugal on April 26. Supplier — Houston energy company Cheniere Energy, buyer — Portuguese Galp Energia.

The United States began to export gas from the Northern coast of the Gulf of Mexico in February of this year. Then, Cheniere Energy has posted the first batch of gas to Brazil. The company’s portfolio includes a number of long-term contracts for fuel supply: for European customers Cheniere WSJ called BG Group, Royal Dutch Shell and Spain’s Gas Natural.

Does threaten supplies of American LNG to Gazprom?

The supply of natural gas from the USA can “to stir up the European market long dominated by Russia”, and lead to a price war with “Gazprom”, — predicts the WSJ.

In the short term, the start of us LNG supplies won’t affect the positions of “Gazprom” in Europe, says Deputy Director General of the national energy security Fund (NESF) Alex Grivach. In comparison with the needs of the European market volume of supplies from North America yet too small, he explains. Now introduced in the USA first LNG terminal Sabine with a capacity of 4.5 million tons per year (about 6 billion cubic meters). Of this amount, not all the gas goes to Europe — the greater part is sent to the markets of Asia and Latin America, he said. For 2016 I introduced the three phases of Sabine and the total terminal capacity will increase to 18 million tonnes (about 24.5 billion cubic meters).

For comparison, “Gazprom” in 2015, delivered to Europe of 158.6 billion cubic meters, increasing the volume of deliveries in 2014 of 8.2%, said the Chairman of the Board of monopoly Alexander Medvedev in early March. The share of the Russian monopoly in the European market over the past year increased from 30.2 to 31%, and that’s a record for the last ten years.

Will force any competition to lower prices for Russian gas?

While the volume of us LNG not play a significant role for pricing in the market. But by 2020 the US is going to introduce four terminal LNG — Cove Point, Freeport, Cameron, Corpus Cristi. Their combined power (along with Sabine) will amount to 57.8 million tonnes per year (79 bcm). Just by 2030 the global market for LNG will grow in 1,8 times, up to 460 million tonnes (626 billion cubic metres) — such data was resulted on LNG in March, Congress Vice-President on commercial issues Shell in Russia Douglas Buckley. Europe is also preparing for growth LNG: strategy of the European Commission stipulates that each European country should have its own facilities for its storage.

Us LNG competition on price, with Russian pipeline gas in the future will be hard, says the Director of East European Gas Analysis Mikhail Korchemkin. The cost of supply of the first U.S. LNG to Portugal is not disclosed. But according to pricing Agency Argus referenced in the WSJ, us LNG shipped to Europe, could cost about us $4.3 per 1 million British thermal units (BTU). For comparison: according to the IMF, Russian gas on the border with Germany in March 2016 cost $of 4.09 per 1 million BTU, Korchemkin specifies. By calculations FAS, the price of gas “Gazprom” outside of the CIS in April is $4,65 per 1 million BTU.

The prices of LNG and pipeline gas are being reduced, largely repeating the trajectory of oil prices from six months ago, said a senior analyst, Vygon Consulting Maria Belova. On the spot market and in long-term contracts the gas price is about $4 per million BTU, or $130-140 per 1 thousand cubic meters

Gazprom has traditionally exported gas to Europe under long-term contracts tied the price to a basket of oil products. Since the late 2000s the prices in long term contracts monopoly began to exceed the spot quotes and European consumers, one after another began to achieve from “Gazprom” to reconsider conditions of deliveries. According to last year’s researches of the Higher school of Economics (HSE) and the energy research Institute (ERI RAS), with 2009 till July 2015 “Gazprom” 65 times to review contracts with 30 European companies. But by the summer of 2015 the prices in long term contracts “Gazprom” almost on par with spot quotes from the decline in oil prices, mentioned in the study.

By June 2015, to achieve revision of the price of continued eight European clients of “Gazprom”. Since then, with at least two of them are German E. On and French Engie — the group agreed on the extrajudicial solution of the dispute.

Increased competition from LNG suppliers to Europe in the current circumstances is unlikely to force Gazprom to dump, says Belov. The group is reluctant to change the pricing in their contracts, reducing the price only by offering specific discounts to buyers, she said.
But the abolition of these discounts in case of changes in the economic situation is fraught with new trials with customers, says the analyst, Recalling the recent dispute between Gazprom and Turkish importers.

Who else is competing with Gazprom in Europe?

“Russia has fantastic advantage for gas supplies to Europe: many gas fields, competitive gas prices and a huge infrastructure for delivery of gas to Europe” — said in a recent interview with BP chief economist Spencer Dale. He predicts that in the next 20 years, despite increasing competition, the share of Russian gas in the EU will remain at 30%. Gazprom itself, as follows from the February presentation of the monopoly, also is going to 2035 to retain more than 30% of the European market.

However, you cannot discount the concerns of Europe about the too strong dependency on one vendor, warns Dale. The growth of the LNG market, he said, means that in the case of what European consumers, there are more opportunities to partially replace Russian gas.

What LNG projects are under way or planned in Russia

“Sakhalin-2” — while unique in Russia the current project (since 2009) liquefied natural gas (LNG). The project developed Piltun-Astokhskoye and Lunskoye fields of the Sakhalin shelf, with recoverable reserves are estimated in 150 million t oil and 500 billion cubic meters of gas. The project operator “Sakhalin energy investment company Ltd”, the shareholders of Sakhalin Energy — Gazprom (50% plus one share), Shell group (27.5 per cent minus one share), the group companies Mitsui (12.5 percent), group of companies Mitsubishi (10% stake). In 2014 “Sakhalin-2” produced 10.8 million t of LNG (equivalent to 14.9 billion cubic meters), which is then transported to Japan, Korea, China, Taiwan, and Thailand courts buyers and tankers-tankers chartered by the company.

For 2017 scheduled to start production of LNG in the framework of the project “Yamal LNG”. The project involves the construction of a liquefied natural gas capacity of 16.5 million tons per year on the resource base of South Tambeyskoye field located in the North-East of the Yamal Peninsula. Probable reserves of gas by the standards of the PRMS (Petroleum Resources Management System standard for the assessment and management of hydrocarbon reserves in the depths) is estimated at 926 billion cubic m. the project Operator and the owner of all assets — JSC Yamal LNG, a joint venture of NOVATEK (50.1 per cent), Total (20%), CNPC (20%) and the Chinese Fund, “the silk road” (9.9 per cent). The total investment in the project is estimated at $27 billion.

Another project of the NOVATEK based Sarmanovskogo field on the Gyda Peninsula is developing a “daughter” company “Arctic LNG 2”. The capacity of the plant can also be 16.5 million tons, the construction period is 2022-2024 years. Sarmanovskogo proved reserves of the field under the SEC classification at the beginning of 2014 was estimated at 235,2 billion cubic meters of gas, according to Russian 1.2 trillion cubic meters of gas.

“Baltic LNG” project “Gazprom” on the construction of an LNG plant in Ust-Luga in the Leningrad region. The plant’s capacity will amount to 10 million tons a year, expandable to 15 million tons per year. Initially “Gazprom” planned to launch the project by 2018. As reported by “RIA Novosti” in the summer of 2015, the first shipment of LNG in the framework of the project were scheduled for the fourth quarter of 2020, and in February of 2016, Vedomosti reported that the plant can run in 2021. The cost of the project, according to “Vedomosti”, in the fall of 2014 was estimated at $10 billion.

In early February it became known that “Gazprom” has postponed the implementation of other project “Vladivostok LNG”, which is scheduled for launch in 2018. The project “Vladivostok LNG” is in the investment stage in February 2013. It was assumed that in the area of Vladivostok will be built a LNG plant with a capacity of 10 million tons a year with possibility of further extension. The cost of construction of the first two phases of the enterprise was estimated in 2012 to 220 billion rubles.

In September 2015, Reuters reported that Rosneft was postponing the start date of the plant “far Eastern LNG” for the period after 2020. Work on the project the company started in 2013. It was assumed that the design capacity of the first plant that could be built on Sakhalin island near the village of Ilyinsky, will be 5 million tons per year, in future the plant capacities may be increased. The original plan was to start in 2018-2019, using as raw material their own stocks of “Rosneft” in the region, as well as the reserves of the consortium “Sakhalin-1” in which 20% belongs to the “daughters” “Rosneft” and another 30% — subsidiary of ExxonMobil, is a partner of “Rosneft” in the project “far Eastern LNG”. In October 2015, it became known that “Rosneft” selects a site for construction of the plant within the project between the Sakhalin region and the port of De-Kastri, located in the Khabarovsk territory.

Another project of “Rosneft” — “Pechora LNG”, involving the development of two fields in Nenets Autonomous district: kaminskogo and Korovinskoye. In October 2015 the technical Director of “Pechora LNG” Victor Okorokov announced that it was considering two options for construction of the LNG plant, with capacity of 4 million tonnes or 8 million tonnes per year with investments of $5.5 billion to $12.5 billion As reported in March 2016, ITAR-TASS, Rosneft invested 7.5 billion rubles. “PH-Pechora LNG” belongs to the structure of “Rosneft” “RN-Gas” (50,1%) and Si Eich Gaz Pitii.Ltd (controlled by Alltech Inc).