Wednesday at 5:01 Moscow time the scheduled launch of the first rocket at Vostochny (11:01 Blagoveshchensk). The launch will see President Vladimir Putin.

Roscosmos said that the launch was going to “in normal mode”. But just in case scheduled backup day — April 28, claims the source . According to him, there is always a spare day and the launch may be postponed, for example because of the changing weather or revealed information. “Putin in the event of force majeure will not stay on the second day,” says Roscosmos.

That will be launched into space?

Launch vehicle “Soyuz-2.1 a” should put into orbit three spacecraft “Lomonosov” and “Stork-2D” and SamSat-218. All three satellites of the Russian production and are launched for scientific purposes, reported the state Corporation. The device “Lomonosov” was assembled at JSC “Corporation “VNIIEM” commissioned by MSU for the analysis of light phenomena in the upper part of the atmosphere and fundamental research, “AIST-2D” and SamSat-218 specialists of the RCC “Progress” and Samara state aerospace University. The purpose of the launch “Stork-2D” — remote sensing of the Earth, SamSat-218 — development of a technology for control of small spacecraft.

First the missile had to fly East in December 2015, however the cosmodrome had no time to build. Project documentation was delayed for two years, told the first Deputy head of Spetsstroy Alexander Zagorulko, and when it was approved, the planned cost of the project was two times lower than the already suffered Spetsstroy. “First thought to build a complex for the other rocket “Rus-M”. But then from the creation of this rocket refused. “We felt that the new missile we don’t need: we can fly in old” — said the former head of Roscosmos Vladimir Popovkin. “The launch of this rocket [the spaceport] East in 2015, of course, cannot be and speeches. The development of a new rocket, until we went from paper to iron, we have stopped”. In the end, Roscosmos needed to re-design that delayed the timing, says General designer of the cosmodrome Igor Barmin, the project had to change on the go.

Now completed the construction of the first spaceport, which can be running a booster middle class “Soyuz-2”. In order to meet the construction schedule, the Russian space Agency has reduced the number of objects of the first stage of the cosmodrome from 20 to 11. Construction work was scheduled to finish until November 30, 2015, but in October, Putin was allowed to postpone the first launch in April 2016.

What will happen after the launch?

After the first launch, the spaceport will be complete. Executive Director of Roscosmos Andrew Mazurin said in 2016-2017 starts, most likely, will not, and from 2018 and in the next few years their will be a little. The construction of the East should take place in three stages. As a result, its size should be about 700 sq km, about ten times smaller than the Baikonur cosmodrome. The whole will be built more than 450 objects, about 100 km of roads and the same iron, was reported by Roscosmos.

The second phase of construction of the cosmodrome is scheduled for 2016-2023. The representative of Roscosmos said that the preparation for the tender will not begin before September, at the same time, you define all the parameters of the construction. According to the results of the second phase (2016-2020) will be built for launch and technical complexes for rockets “Angara” and the infrastructure for manned flights. The third phase is planned by 2030 — then launch you can launch the heavy-lift launch vehicles, including lunar expeditions.

How much cost the construction?

In the Spetsstroy warn that major costs still to come. “The second phase will be much harder than the first, as a missile of another class, and the wider complex,” — said the Deputy head of Spetsstroy Alexander Mordovets. The construction of the second turn of the cosmodrome, according to Rogozin, will require about 250 billion rubles. 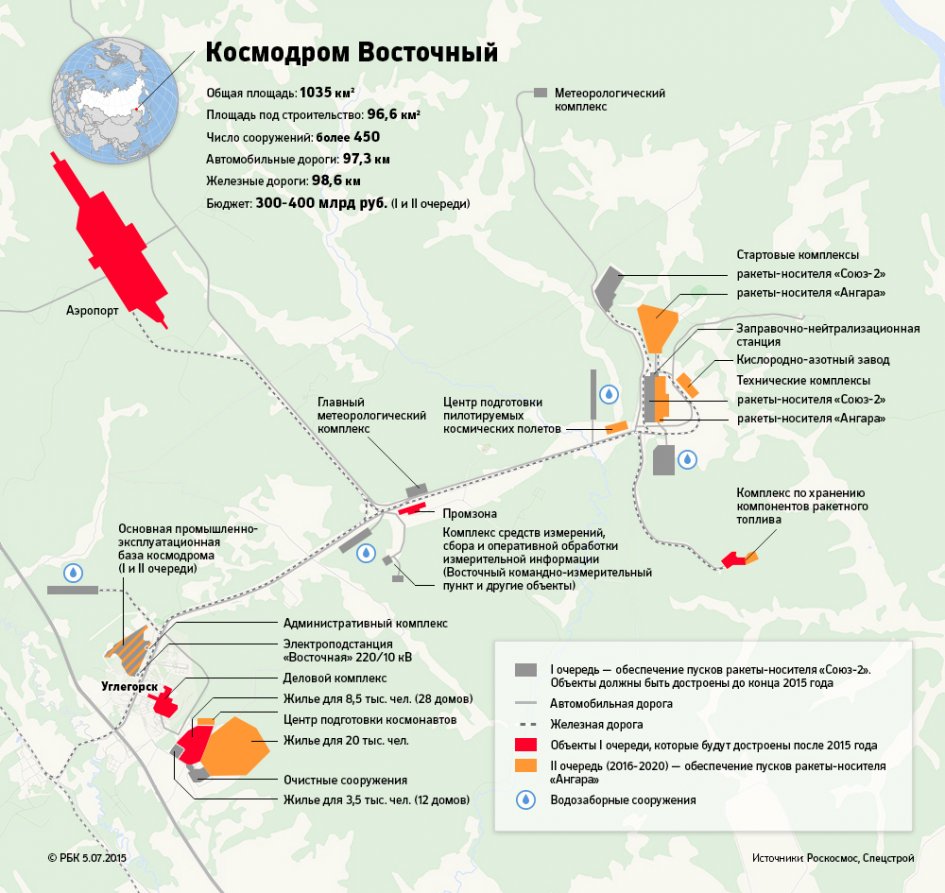 The final estimate does not exist. There is only a plan, spelled out in the Federal space program for 2016-2025. On it the state is going to allocate 1.4 trillion rubles., and after 2022 is another 115 billion rubles (the program includes, in particular, the development of spaceports). Officials in their assessments of the total costs diverge: in December 2011 the Director of Federal Agency for special construction Gregory Naginsky gave a figure of 300 billion rubles, in December, the space Agency presented to the government already estimates at 493 billion rubles, the Head of the scientific and technical Council of Roscosmos Yuri Koptev in 2015 said that we need 560 billion by 2025.

Eastern is the first Russian cosmodrome for civilian use. Most Russian launches for civil purposes comes from the Baikonur cosmodrome, leased by Russia until 2050. Russia annually pays rent of $115 million, said the representative of Roscosmos. The cosmodrome Plesetsk in the Arkhangelsk region is mainly used for military purposes.

Eastern has advantages over Baikonur, told me in 2007, led at that time by the Federal space Agency Anatoly Perminov. Among the advantages he called convenient arrangement: the first stage of the rocket will fall near the launch site in the taiga, the second — in the waters of the ocean. In 2010, Perminov promised that by 2020 the East will translate to 40-45% of the required runs, including for the needs of meteorology, communications, broadcasting, navigation. “The proportion of problems solved with the use of the Baikonur cosmodrome, will decrease from 65% to 11%,” — said Perminov.

After the completion of Eastern Russia has no plans to stop using the Baikonur cosmodrome in Kazakhstan at least until 2030. President of the Moscow space club Sergey Zhukov believes that the decision to remain at Baikonur strategic: many countries, such as USA and China, with several launch sites for risk diversification.

The construction of the East was accompanied by scandals, resignations and criminal cases. The Roscosmos head was changed twice. As a result, the Department has been headed by ex-President of AVTOVAZ Igor Komarov. In the summer of 2013 Prime Minister Dmitry Medvedev dismissed the head of Federal Agency for special construction Gregory Noginskogo — General contractor of construction. In “Dalspetsstroy” — subordinated to the unitary enterprise Spetsstroy actually engaged in construction, — changed from the 2013 five executives.

In particular, in November 2015, Russia’s Investigative Committee (SKR) has informed on end of investigation of criminal case against the former head of “Dalspetsstroy” Yuri Chrisman and chief accountant of the enterprise Vladimir Ashikhmin. According to investigators, in 2011-2013 Hrizman and Ashikhmin illegally spent 5,16 billion from 22.6 billion rubles of advance 11 to state contracts. Money went to payments on loans “Dalspetsstroy” that, in the opinion of the TFR, caused material damage to the state. Hrizman and Ashikhmin arrested, their case of the far-Eastern district military court is considering behind closed doors.

Not less loud was the story of the delay in the payment of wages to the builders of the cosmodrome. In December 2014 the Fes was first reported that one of the subcontractors of Pacific bridge construction company (TMK), was owed to 1100 employees in nearly 61 million rubles, but the debt has already been repaid. Four months before the company left Victor Grebnev, the General Director and the owner. Grebnev went to work in the administration of Primorsky Krai, and in comments to “Kommersant” claimed to have sold 75% shares of TMK “Moscow.” The arbitration court of Primorsky Krai imposed on TMK monitoring procedure, and six months later declared the company bankrupt.

TFR opened a criminal case on Grebneva, suspecting him of causing losses to the company at 400 million rubles, the Company issued a press release in which he said that Grebnev spent allocated money for the construction of the yacht, the purchase of apartments and construction of two-storey mansion. However, the investigation Committee considered that for the delayed payment of salaries should be the responsibility of the new leader, and opened a criminal case in which he was arrested, Igor Nesterenko, head of TMK after Grebneva. Judicial proceedings against Grebneva and Nesterenko continued. Grebnev resigned from the administration of Primorye. According to labor staff, duty as of April 21, 2016 amounted to 129 million rubles Fact the debt was confirmed by the Prosecutor’s office of Primorye.

In addition to criminal cases filed numerous lawsuits in arbitration: Spetsstroy and “Dalspetsstroy” trying to recover from unscrupulous contractors through the court more than 4 billion rubles However, according to the database SPARK, the sum of claims to “Dalspetsstroy” much more: only two and a half months of 2016 the amount of the claims exceeded 6.8 billion rubles In 2015, the contractors filed lawsuits against the General contractor in the amount of 9.9 billion USD.

Can the authorities to recoup the cost of the construction of Eastern?

Russia plans and commercial launches from the Eastern. The first is scheduled for 2018, said on 12 April, the head of the state Corporation Igor Komarov. According to “Kommersant Money”, we are talking in particular about the largest contract in the history of the launch services agreement signed between the British company OneWeb and the French Arianespace, which involved the launching of satellites of the same communication system with the help of 21 of the Soyuz launcher.

According to Komarov, the Russian businessmen also show interest in the organization of space tourism, and Roscosmos is ready to technically support these initiatives, but the state Corporation “do not focus” on the independent development of this market.

Evaluation Director research and analysis center of the United rocket and space Corporation Dmitry Paison, the share of commercial orders for the provision of space services in Russia and the USA are practically the same — about $11.3 billion Member-correspondent of the Russian Academy of cosmonautics Andrei Ionin sure that the authorities don’t need to pay back the cost of the Eastern, difficult to give figures in which the spaceport could earn. When he developed the project, three objectives were set, says expert: the development of the far East, attracting investment, and young professionals and promoting international cooperation in the space industry. According to Ionin, launching of individual missiles from the East the prospect is remote. “Private rocket first need to build, need to see if there is a launch pad under it, infrastructure. If in Russia there will be private rocket, the launch site can make money: about 10% of the cost of launch — it will be the income of the spaceport,” he said.