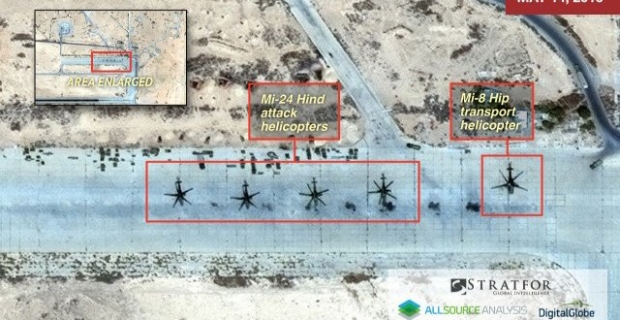 Published on may 24, American intelligence-analytical company Stratfor satellite images show traces of burning four helicopters. Analysts suggest that it was a Russian Mi-24 helicopters, which were stationed at the military base of T4 in the vicinity of Palmyra on may 14. According to them near Palmyra not worked Syrian Mi-24

Stratfor also published pictures of burnt out truck near the base. In addition, the company has posted pictures of downed MiG-25 the Syrian army. 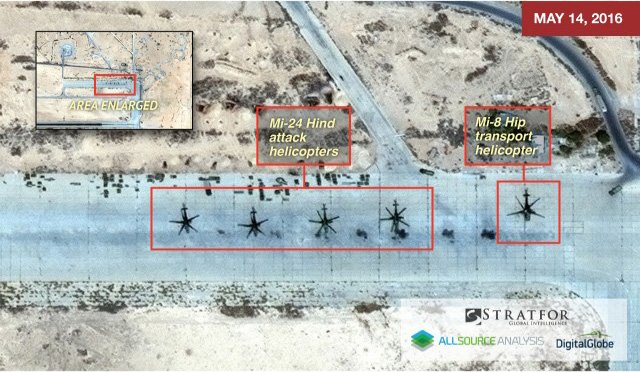 Four helicopters Mi-24 and one M-8 on the base near Palmyra, 14 may photo satellite Photo: stratfor.com 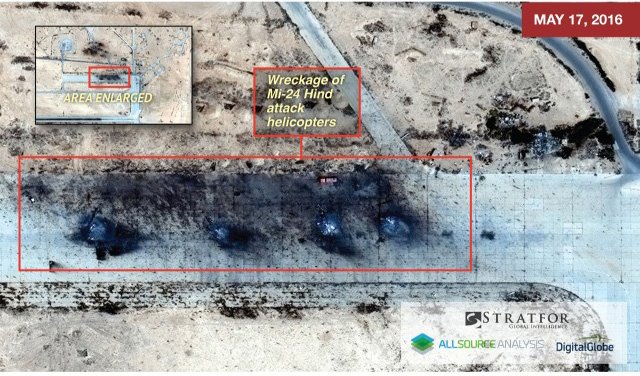 Four burnt-out helicopter at the base near Palmyra, may 17 photo satellite Photo: stratfor.com

The first mention of burnt helicopters and trucks appeared on 14 may 2016 in Arabic Twitter accounts. Syrian activist Nidal has published information about four helicopters destroyed and burned 20 trucks with missiles. He also said that the Russian pilots, located at the base of T4 near Palmyra, were killed. Later, the Agency Amaq, publishing news banned in Russia as ISIS, has confirmed the data about the destruction of the helicopters, however, no evidence is cited. 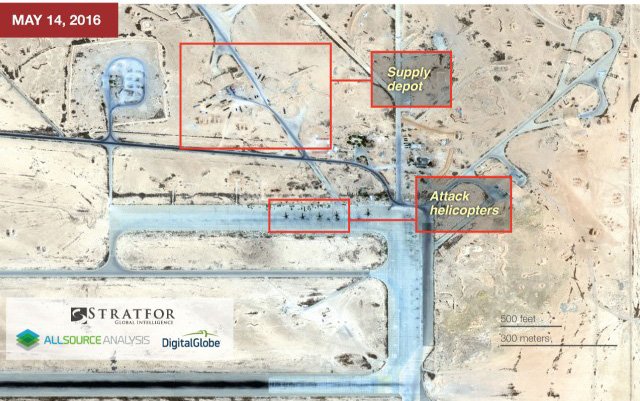 The satellite base near Palmyra, may 14 Photo: stratfor.com 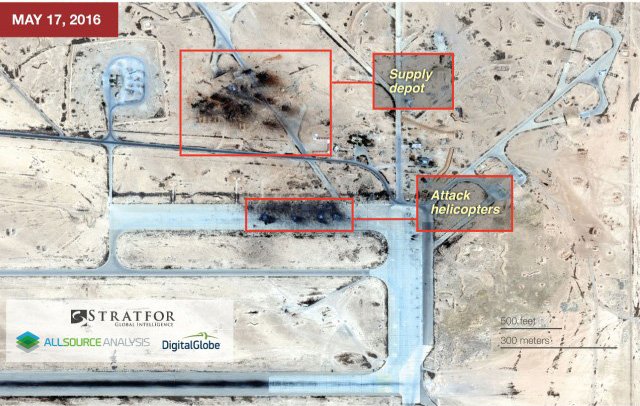 The satellite base near Palmyra, may 17 Photo: stratfor.com

According to independent military analyst Anton Lavrov the pictures very clearly show that it is the burning helicopters. “On one of the fire scenes is clearly visible on the tail of the helicopter, usually he stays in combustion. Also visible are traces of the helicopter alloys, which are left on the earth” — explains the expert. However, Lavrov noted that to determine exactly what the helicopters burned down and which side they belonged, in these pictures it is impossible.

The cost of the helicopter Mi-35 (export version of the Mi-24) the experts of the Center for analysis of world arms trade was estimated at $15 million Thus, losses in monetary terms can be several tens of millions of dollars.

During the Syrian campaign Russia faction HQs have lost three pieces of equipment: Turkey downed a su-24 bomber, shot down Turcoman group of the Mi-8 helicopter crashed due to an error of crew of the Mi-28. According to estimates the cost of these losses amounted to about 1.5 billion rubles.

American intelligence-analytical company Stratfor analyses and forecast military threats and military-political situation in the world. Collecting data from public and private sources, the company publishes its economic, political and military analyses of the events occurring in the world. The company was founded in 1996 by the American political scientist George Friedman. He heads the Stratfor so far. In 2012 WikiLeaks published a selection of emails of company employees. In addition to the disclosure of some informants of the company in the correspondence mentioned about the plans to use Friedman’s Stratfor information to commercial interests.