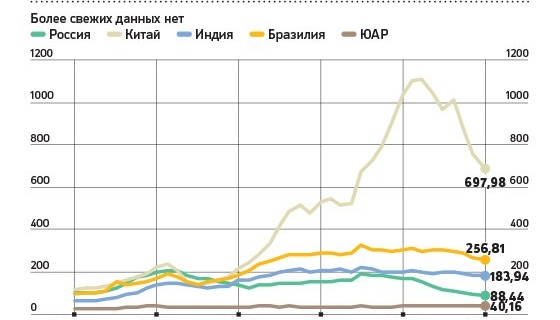 Cross-border lending to residents of Russia for the last three years (March 2016 to March 2013) decreased by almost $100 billion, said in the quarterly report of the Bank for international settlements (BIS), released in mid-September. We are talking about the total debt of Russian residents (including banks and non-financial corporations) for all possible instruments (loans, debt securities, deposits) to the banks in 30 reporting countries to the BIS.

At the end of March 2016 (the latest available BIS data), this indicator decreased for the tenth consecutive quarter, to $88,4 billion adjusted for exchange rates (Russian debt denominated in different currencies, mostly in dollars and euros) loans fell by $96 billion from the end of March 2013, follows from the statistics of the BIS. Why did this happen and what are the consequences for the Russian economy?

A significant contribution to the reduction of the loan from abroad had made the sanctions. Sectoral constraints that have deprived the Russian company access to long-term financing, in force as of mid-2014. Large national banks can no longer engage in lending — they lost access to cheap credit which are then issued at a higher rate, said the head of the global Finance Department the Financial University under the government of the Russian Federation Elena Zvonova. Did this mainly major credit institutions — Sberbank, VTB, Alfa-Bank, VNESHECONOMBANK, Promsvyazbank, she points out.

Banks outside the European and the American jurisdictions, are simply afraid to lend to Russian businesses, because you don’t want to have problems with regulators in the U.S., adds the head of the Department of applied macroeconomics school of Economics Evgeny Gavrilenkov. The decline in Russia’s GDP has already lasted six consecutive quarters, resulting in a fall and the appetites of the creditor countries. “If they had seen some backup from the point of view of the creditworthiness of Russian borrowers in the form of a growing economy, now it is not,” says Gavrilenkov. 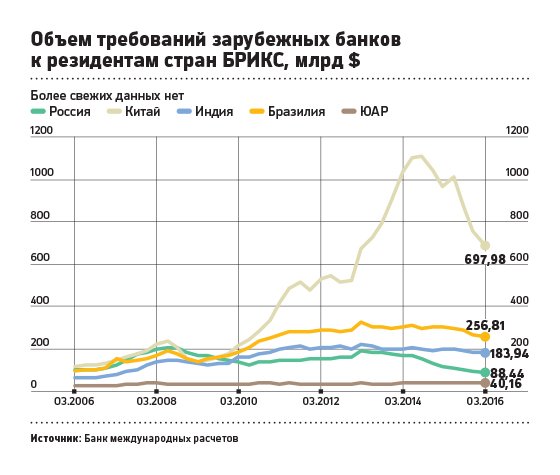 There is no demand for loans

However, Russia had dramatically increased the volume of loans from abroad, and this is quite natural taking into account the economic realities of the country, he said. Cross-border lending may increase in case of growth of the Russian economy. According to the Bank of Russia’s GDP next year will grow by 0.5–1%, and in 2018 and 2019, 1.5 — 2% annually.

Some banks, oil and steel companies in the previous decade taken loans from abroad under purchase of assets abroad, reminds Gavrilenkov. However, after the imposition of sanctions “stopped abruptly” and the need to loans for foreign deals fell. But not only the sanctions have led to a drop in the volume of international loans. It started back in 2013, before the introduction of restrictions (see chart). The reason — lack of demand for loans caused by the drop in capital investment, says senior analyst of “URALSIB” Olga Sterol.

The analyst of Raiffeisenbank Denis Poryvai considers that the operation of cross-border lending, shown in the statistics, most of them were “just looped transaction” within banking groups. “Banks could give a loan at 0% to under 8%. The economic meaning of this operation is to bring the capital,” says Poryvai. Reducing such operations is the result of the work of the Central Bank, he said. However, among cross-border transactions and it has quite the “healthy part,” he admits, qualifies this by adding that in recent years, it is still declining, because Russia often extinguishes the debt, than gaining a new one.

Dynamics of cross-border lending to Russia is very different from that of China, its largest partner in the BRICS. Since 2009 China, according to the BIS, and increasing the amount of foreign loans, which peaked in September 2014 ($1.1 trillion), and only then began to decline. As noted in the report of the BIS, due to the large volume of loans that banks issued to the corporate sector, China has never been closer to a banking crisis.

“The increase in Bank loans in China, and the lack or more of slow growth in Russia for the same reason — foreign direct investment,” says Zvonova. If in Russia they have always been relatively low in the Chinese economy, the investors invested, and in the 1990s, and even after the crisis of 2008-2009. In China, investors continued to believe until 2014, and together with its attachments has been involved in Bank loans from abroad, she continues, but with the slowdown of investments, their volume began to fall. As of March of 2016, the volume of cross-border debt in China is $697,9 billion.

The decline in cross-border lending has contributed to the reduction of investments in Russia, says the Director of the research center of international trade Ranhigs Alexander Knobel. In 2015, investments in fixed capital in comparable prices has decreased by 8.4% — the largest contraction since 2009, according to Rosstat. “As Europe continues quantitative easing, the stakes are zero, negative or small. A [Russian] investors can start to borrow even with all the nuances to get at least some yield,” concludes Gavrilenkov.