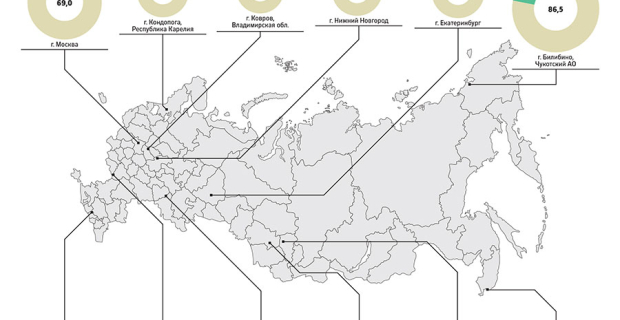 Food basket in the Russian villages is more expensive, than in Moscow, writing in his study “Russia “bread and water”: the prices in the regions,” experts of the Center for economic and political reforms (CEPR). According to their calculations, this fact is true for nonfood products, in particular drugs. Month of life in Moscow, at minimum cost, as the study says, might be cheaper as in per person and per family.

There is no choice

Analysts were asked in August—September to observe the prices of goods to the residents of Moscow, Yekaterinburg, Nalchik, Vladivostok, Nizhny Novgorod, as well as small towns and villages: Kondopoga (with a population of 31 thousand people), the village of Kesten’ga in Karelia (2.1 thousand), Bilibino in the Chukotka Autonomous area (5,4 thousand), the village of Veshenskaya in the Rostov region (10.5 million), of Buguruslan in the Orenburg region (50 thousand people), Mordovia and Buguruslan (Orenburg region, too, 357 people in 2010), etc. — only 17 settlements. They had to visit a chain supermarket, a regular retail store and market and each of them to fix the prices of the cheapest and the most expensive item of each type. In addition to the products participants also watched the prices on cosmetics, household chemicals and medicines. 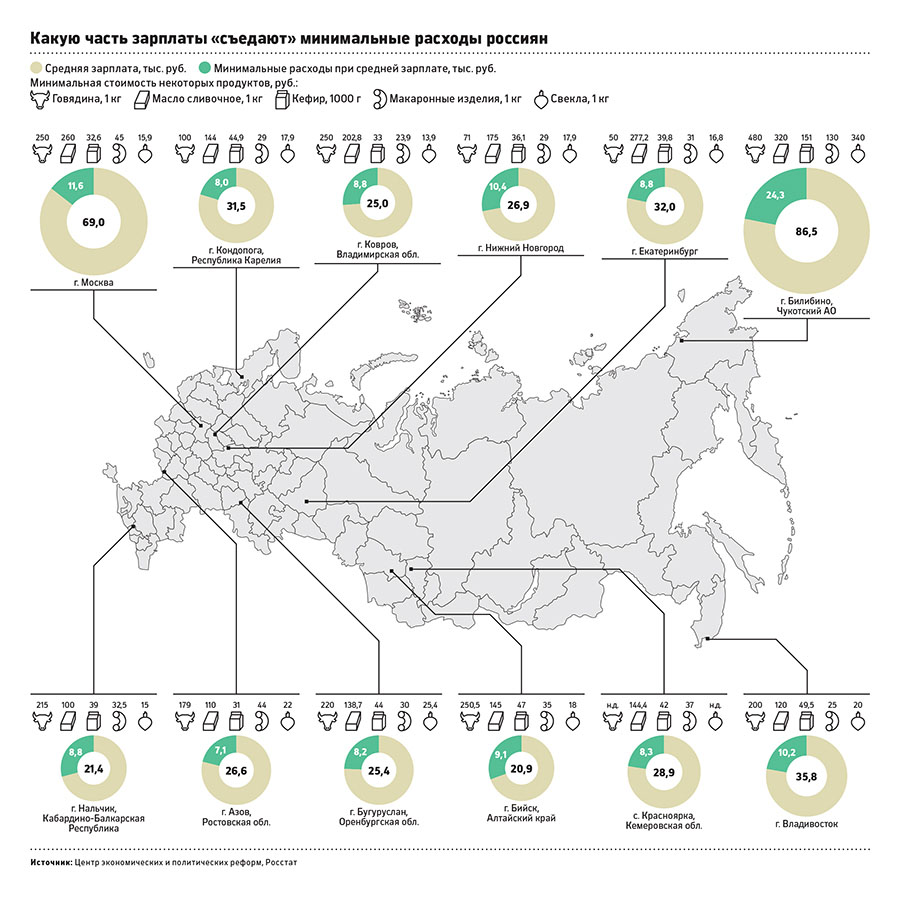 It turned out that the most expensive the cheapest set of products costs Bilibino — 4660 RUB Followed by seaside Kievka (2070.), Kesten’ga (1680 RUB), Vladivostok (1585 RUB) and veshenskaia (1476 RUB). Moscow only in sixth place — the capital cost of such a set is 1393 RUB the Authors emphasize that in all cases focused on the lowest price, the goods can be not the highest quality, and to find them, buyers need to bypass several retail outlets. They calculated the amount “insufficient for a normal lifestyle, not to mention life at a decent level”, according to the study. In addition, very cheap products, especially not in chain stores, it may be a counterfeit, says senior researcher of the Laboratory for studies in economic sociology HSE Elena Derbisheva.

The opposite picture draws official statistics on average prices. According to calculations based on Rosstat data, a set of food, similar in range to what uses CEPR, the capital costs 5791 RUB Is the highest value among mentioned in the study regions (see infographic). Pricing in segments of cheap and medium-cost goods, is different, stresses the head of the chair of applied sociology of the Financial University under the government of the Alex Barb: products stock you can buy and a half, and two times cheaper than usual. Rosstat data are not devoid of “political” component, Derbysheva says: “In Moscow the average wage in two and a half times higher and no one will resist, if statistics show that the products are expensive”. And the situation in which data from Rosstat show that prices in the regions far exceed in Moscow, could cause social protests, she said.

The experts also calculated how much it costs to cook a pot of borsch on the meat broth. They took as the basis of 0.5 kg of beef, 0.5 kg of potatoes, 300 g onion, 400 g of cabbage, 200 g carrots and beets. With a large margin this indicator is the leader Bilibino (628 rubles). The next Kievka Primorsky Krai cook the soup is 163 RUB Moscow is located on the fifth place (149 rubles). The cheapest soup of minimum set of products is weld in Nizhny Novgorod — there’s a pot will cost only 63 RUB.

In addition, it is estimated there were “the price of bad habits.” Cheapest filter cigarettes and a bottle of vodka 0.5 litre most expensive cost in Bilibino (590 RUB). In Moscow, the figure is 249 RUB, in the Kievka — 367 RUB in Mordovskiy Buguruslan — 353 RUB.

According Capra, drug prices in Moscow are also not the highest: the capital took fourth place at the cost of the cheapest set of drugs (2710 RUB). Relatively cheap in Moscow costs and basic non-food set that includes soap, toothpaste, washing powder and shampoo. To buy them in Moscow, if you visit different retail outlets, you can just RUB 129,6 is almost the lowest price in the country (15 out of 17 seats). In Bilibino this set costs 495,5 RUB, in the seaside Kievka — 274 RUB in Mordovskiy Buguruslan — 263,4 RUB gasoline Prices in Moscow are lower than in other reporting localities (13th place).

The average salary in the capital is much higher than in other cities, Moscow is ahead of only the Chukotka Autonomous Okrug. People in small towns and villages “limited assortment and price policy of one or two shops”, and residents of large cities can choose cheap products with discounts, promotions and variety of shops, explained in the study.

Moscow leads the only prices for travel in public transport (50 RUB per trip / 2000 RUB for a monthly pass, which is twice more than in Yekaterinburg, which is located in second place) and housing and communal services.

Not enough to live on

Experts have calculated and summed up the minimum monthly cost of all basic groups of goods (food, medicines, basic non-food items and payment of utility services; in larger cities, also considered the public transport). Muscovite, according to this, needs to spend 11.6 thousand rubles. per month. This is one of the highest absolute values in Russia, but if to convert it into ratio with the average salary (according to Rosstat), indicate that the share of minimum expenditure of residents of the capital is just 16.8% of his earnings. And this is the lowest value among all the localities included in the study.

For comparison: in Biysk (Altai Krai), the minimum expenses make up 43.7% of the average salary in Nalchik — 40,9%, in Mordovskiy Buguruslan — 38,9%. While most people have salaries below the average, experts say, so they used a reduction factor of 2/3. In this approach, the minimum cost of living Moscow will make up a quarter of the salary, and, for example, in Biysk, which is 65.5%, Nalchik — 61,4%. In such cases, write the economists, inhabitants of small towns and villages is only a few of thousand on other expenses, including the provision of dependent people.

Pensioners, the study shows that the minimum costs can be up to 90% (Mordovskiy Buguruslan) and even 109% (Bilibino) of their pensions. In the latter case they will go into a monthly loss of $ 1968 RUB This situation even though in a minimal set of pensioners does not include the transfer in public transport.

The family of three with two working adults (husband with an average salary, a wife with half the average wage) will be enough for minimal costs in all considered towns, but in some cases again, they will not exceed half of the total earnings. As written by experts, in such situations, parents may not have enough funds to support the child with everything necessary. Analysts also considered pessimistic, but common (according to them) option: the family is the husband receiving wages below the average according to Rosstat, and the wife stays with the baby. Then the money even on minimum charges will not be missed in 11 of the 17 considered settlements. “Thus, for most Russian families strategy, when the mother brings up the child, and the father provides the family, in principle, impossible,” the authors conclude.

The myth of the “most expensive products” in Moscow

Save on products to residents of large cities allow a “flexible strategy of consumption” that are not able to use the villagers, the study said Capra. In the last range of products is limited and prices are often higher than in major cities. The Moscow market is much more competitive, all companies use marketing techniques, confirms Alex Barb. In Russia there is a whole culture of cheap offers, he said: Moscow has the most developed, and in small towns, on the contrary, doing this is impossible.

Another reason for higher prices in small towns — the cost of distribution, indicates Elena Derbisheva. Many goods, especially imported ones, are delivered to regions with distribution centers in Moscow, she said: “you Can be lucky something for 3 rubles and 50 kopecks earn, but the stores prefer to carry products for 25 RUB, to earn at least $ 5”. Another difference of Moscow from smaller towns and villages, in its opinion, — the availability of stores with very low prices and quality of goods, which is visited mostly by the poor. In particular, we are talking about migrants in other cities not so much.

In addition, small stores are more difficult to maintain business, says Prong: content per unit of output is always higher than the contents of the Moscow supermarket. The role played by the factor of monopoly, he adds. People can drive to the neighbouring village, to spend the money on the road, but to buy goods cheaper than in the village, and can go to the local shop with higher prices. In General, the regions to hold a high price simpler than in Moscow, emphasizes Alexey Prong.

However, residents of small settlements are products of their households, so they have “developed their own internal mikrorynki, where people sell each other home-made goods,” write the experts Capra. But to become self-sufficient completely impossible — for many of the goods they still have to travel to larger cities and towns, which entails additional costs. According to analysts, the myth that Moscow is “the most expensive goods in stores”, which correspond to high income, can be questioned. “The smaller and more remote the locality, the poorer the offer, why the first to suffer the least wealthy Russians,” the authors say.