The inauguration of Barack Obama as U.S. President took place on 20 February 2009. By this time the U.S. military was involved in two protracted military conflicts in Iraq and Afghanistan.

In addition, during his presidency of the United States in the international coalitions involved in military intervention in Libya in 2011, and since 2014 also in military operations against ISIS (a terrorist organization banned in Russia ) on the territory of Syria and Iraq. Unlike Iraq and Afghanistan, in Libya and Syria, the United States has not used its troops to conduct ground operations, limiting the support of the allies by the air force and the U.S. Navy.

The U.S. military campaign in Afghanistan

Three days after the terrorist attack of 11 September 2001, the U.S. Congress passed a law authorizing the use of U.S. military forces against the terrorists involved in the attack on America. In October, the U.S. officially launched a military operation in Afghanistan together with the British troops. The airstrikes were conducted in Kabul, Kandahar (home of Mullah Omar), and also the city of Jalal-Abad. To the military coalition fighting in Afghanistan and Pakistan also joined Germany, France, Canada, Australia, Spain and many other countries.

After coming to the White house in December 2009, Obama said that he would send to Afghanistan 30 thousand American military to completely destroy “the refuge” al-Qaeda, to build on the success of the international coalition and to prevent the Taliban from overthrowing the local government. Since then, the US military presence in Afghanistan has grown — up to 2011.

In this period, there was a series of military successes of the USA army like a military operation “Strike of the sword” (also known as “handzhar”) in Helmand province in southern Afghanistan, and the destruction of the leader of al-Qaeda Osama bin Laden in may 2011 in Pakistan.

“The most difficult decision I made at the beginning of the tenure of the President when ordered to send another 30 thousand soldiers to Afghanistan, as those who wished to put an end to the extensive presence of the (American) military in other countries”

After 2011 the number of American troops in Afghanistan has steadily decreased. At the end of 2014, Defense Secretary Chuck Hagel announced the launch of a new US operation in Afghanistan called “Guardian of freedom”. He explained that the phase of active hostilities have long been completed, and the new US mission in Afghanistan is to work with allies and partners and conducting counter-terrorist operations against the remnants of al-Qaeda. 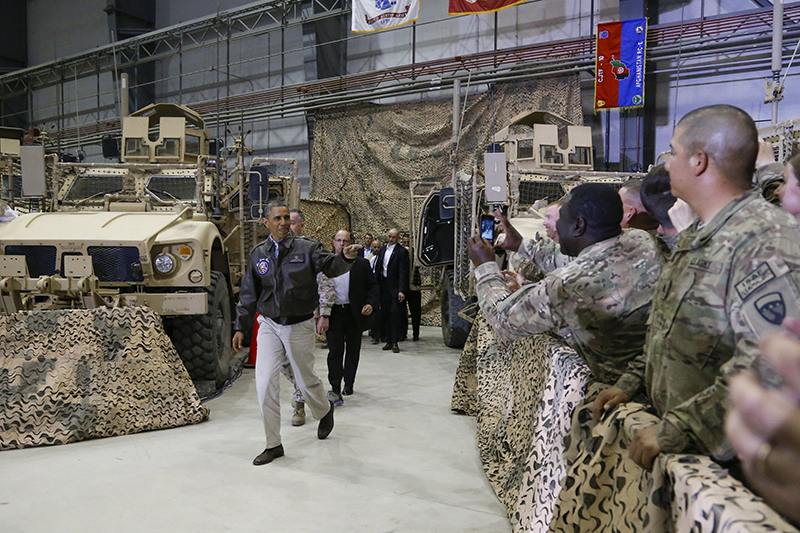 US President Barack Obama in American Bagram military base in Afghanistan. 2014

According to data Center personnel, Department of defense, at the end of 2008 in Afghanistan were to 95.7 thousand. US servicemen. During Obama’s first term the number of American military grew steadily, reaching by 2011 the maximum value of 185,1 thousand. However, in the following year their number was reduced to 85,7 thousand people, and since then constantly decreased. By the end of 2016, according to the Pentagon, in Afghanistan there are only 14.2 thousand us military.

According to the evaluation of the losses of the Pentagon, from 2001 to 2014 in the fighting in Afghanistan died 1843 American soldiers were wounded — 20092. Another 31 people have died since the beginning of operation freedom’s Sentinel in January 2015. U.S. Department of defense does not publish information about how many people have died over the years.

According to the congressional Research service, spending for operation enduring freedom in Afghanistan from 2008 to 2014 is estimated at $686 billion This amount includes the costs not only of the Pentagon, and other departments and agencies.

​The U.S. military campaign in Iraq

USA as part of an international coalition began military operations in Iraq in 2003. The reason for the invasion of Iraq was the message of U.S. intelligence that Iraq was evidence of development of weapons of mass destruction.

Shortly after his inauguration as U.S. President, Barack Obama promised that the American military mission in Iraq will be completed by 31 August 2010, after which the US will begin the transfer of the country under the military control of the Iraqi army.

“I was against the war in Iraq precisely because of the belief that we need to exercise restraint in the use of military force and always consider the long-term consequences of our actions. We’ve been at war for eight years, suffering enormous loss of life and consuming resources”

Operation of U.S. military forces in Iraq received a new name in September 2010 — “a New dawn”. The U.S. Secretary of defense Robert gates stated that the name change means the end of the phase of active hostilities and the changing role of the audience in the country forces of the American army, who now have to act as consultants and trainers for the Iraqi military. 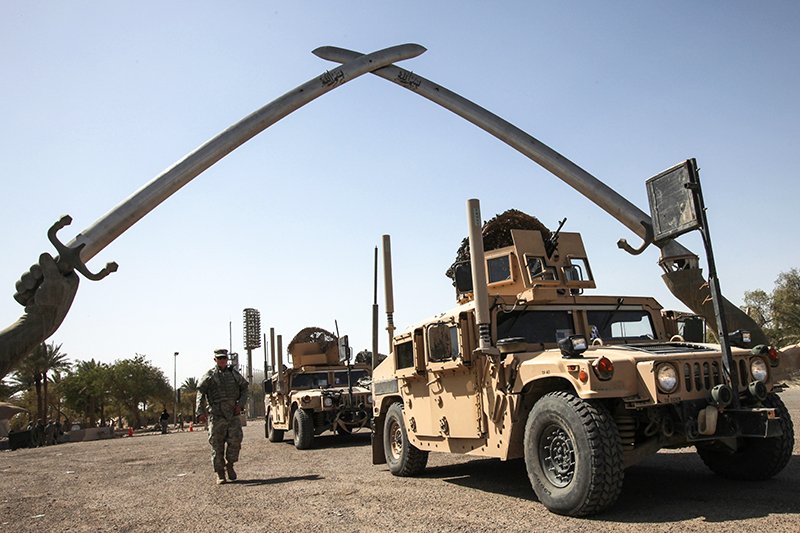 Soldiers of the U.S. army in Baghdad

According to data Center personnel, Department of defense, by the time of arrival of Obama to the White house, just in Iraq were 324,4 thousand. US servicemen. By the end of operation Iraqi freedom, the number was increased to 133.3 thousand people.

For the year of operation “New dawn” more than 100 thousand U.S. troops left Iraq. By December 2011 the number of American troops in Iraq had dropped to 22.2 thousand people, and by the end of 2016 in the country remained little more than 6 thousand. American military, a large part of the population whom are civilians and reserve officers.

According to the estimates of the losses of the Pentagon, from 2003 to 2012 were killed in Iraq 4485 people were injured — 31953. Another 73 people were killed after the beginning of operation New dawn. U.S. Department of defense does not publish information about how many people have died over the years.

According to the congressional Research service, operations Iraqi freedom and New dawn has cost the United States $815 billion.

U.S. participation in the military intervention in Libya

19 March 2011 international coalition, which included the US, other NATO countries and the countries of the Middle East, launched a campaign for military intervention in the civil war in Libya. The intervention was authorized by UN security Council (resolution 1973).

The American part of the operation was called “Odyssey.Dawn” (Odyssey Dawn) and lasted only 11 days, from 19 to 31 March 2011. Since the end of March, the U.S. Navy joined the NATO operation “unified protector”.

The report, prepared by the Research service of the U.S. Congress in March 2011, are listed in the operation “Odyssey. Dawn” was involved in the strategic B-2 bombers, fighter-bombers, F-15E attack aircraft A-10 and AC-130 aircraft suppression of air defenses F-16CJ, anti-submarine patrol aircraft P-3 aircraft electronic countermeasures EP-3 and tanker aircraft and military transport aircraft.

“We managed to stop the advance of Gaddafi’s troops on Benghazi and to create the necessary conditions to protect a number of settlements from attacks by government forces. To start a new life Libya requires three things: the implementation of UN security Council resolution, providing humanitarian aid to the recently liberated cities and joint efforts in planning for the future of the country.”

After the transfer of command of the Libya operation to NATO it is called “unified protector” (Unified Protector), and the armed forces of the United States supported an embargo on the supply of arms, provided a no-fly zone over the country and assisted the allies in the coalition. According to the Research service of the U.S. Congress from 29 September 2011, most U.S. forces were directed not at the attacks on ground targets in Libya, and aircraft refueling, intelligence, surveillance and reconnaissance, electronic warfare and suppression of air defense. These operations were performed by four manned aircraft. Other manned aircraft also remained on duty, but for their participation in the transactions required the approval of the Minister of defense. In addition, the U.S. provided the Alliance armed drones that have carried out more than 100 strikes on ground targets. 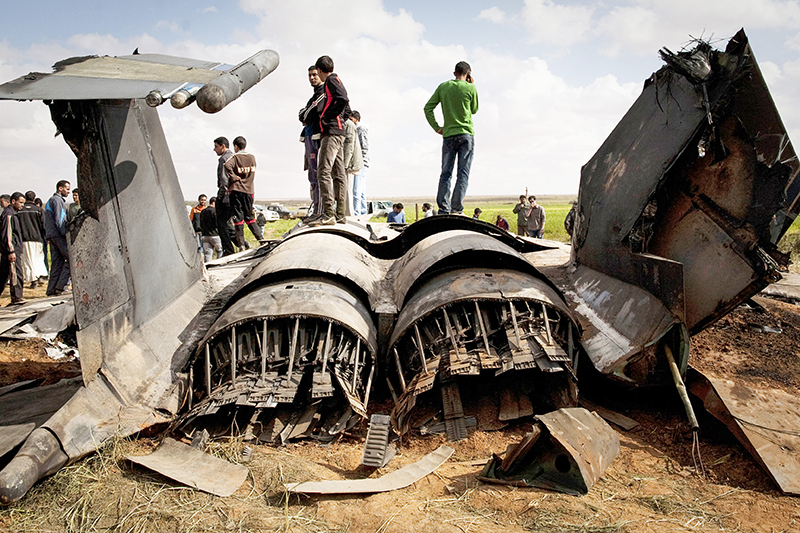 Unlike the wars in Iraq and Afghanistan, in Libya, the U.S. did not use its military for ground operations in the country, and the official data on the number of personnel involved in the operations of the Navy and the U.S. air force in Libya, the Pentagon does not publish.

Official data of the U.S. Department of defense about the number of U.S. troops killed in Libya, no. Libya had lost the F-15E, but the two crewmen managed to eject.

The report of the congressional Research service, the cost of the first 10 days of operation (from 19 to 28 March 2011) amounted to $550 million (excluding the cost of the lost plane).

U.S. campaign against ISIS in Syria and Iraq

Its official name is the US operation against ISIS in Syria and Iraq has received only in October 2014, after two months from the moment the aircraft struck the first blows on ISIS in Iraq.

US air strikes on ISIS targets as part of the international coalition, which also includes Britain, Canada, Australia, France, Denmark, Saudi Arabia, UAE and others.

On 27 July 2016, the United States together with coalition partners have carried out more than 14,000 air strikes in Iraq and Syria. Almost 11,000 of these attacks were committed by American aircraft. Most of the attacks — more than 9,000 — were inflicted on Iraq.

“The U.S. will continue to increase pressure on Syria and will do everything possible for the international isolation of Bashar al-Assad. We intend to support the Syrian people” 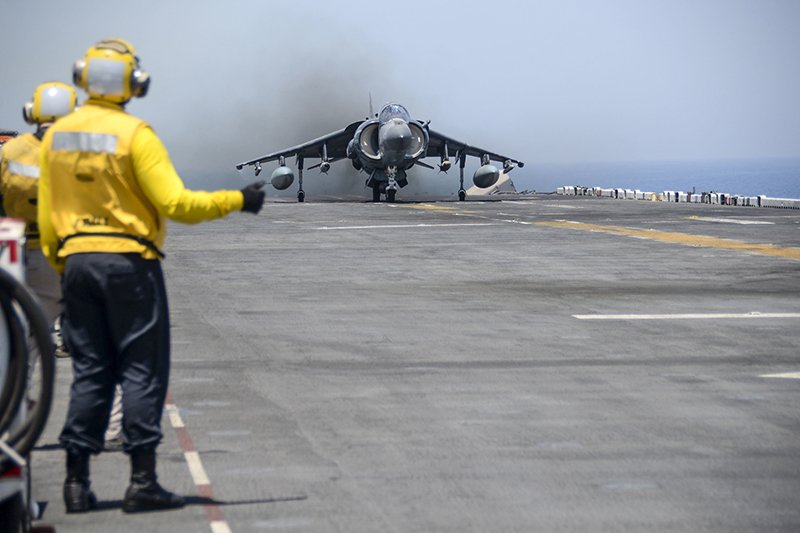 According to the estimates of the losses of the Pentagon, since the beginning of operation “Unwavering commitment” in the fighting killed 8 American soldiers, 24 more were killed for other reasons, which the Ministry of defence does not call.

The legacy of the 44th commander of the United States

Overall Obama 2008 to 2016 was able to dramatically reduce the U.S. military presence on the territories of other countries. In 2008, the number of American soldiers and civilians in the service of the Pentagon abroad exceeded one million two hundred thousand people, and in 2016 amounted to 277,2 thousand.

In total, the United States at the end of 2015 had 587 foreign military bases and other military installations (warehouses, barracks, etc.).

Most of the American military facilities in Germany, Japan and South Korea, and the US Department of defense did not disclose the purpose of a number of structures.

In Germany placed the operations center of NATO, a large part of the Alliance forces stationed on the territory of this country.According to the report of the Ministry on the structure of military bases in September 2014, located in Germany, 177 military facilities of the United States, 50 of them training ranges, airports and barracks.

In addition, in Germany (and also in Belgium, Italy, the Netherlands and Turkey) hosted American nuclear weapons, which is under the control of the us military, without security clearance of sensitive sites of the military host.

In Japan, hosted 116 military facilities of the United States. The deployment of us military bases on the territory of this country is governed by the Treaty of mutual cooperation and security between the United States and Japan, signed in 1960. In exchange for the ability to create bases in Japan and post them on any number of weapons the United States pledged to maintain “peace and stability” in the Asia Pacific region and to provide security for Japan against external threats.

South Korea posted 82 military object of the United States. American military bases located in this country in accordance with the mutual defense Treaty concluded in 1953. 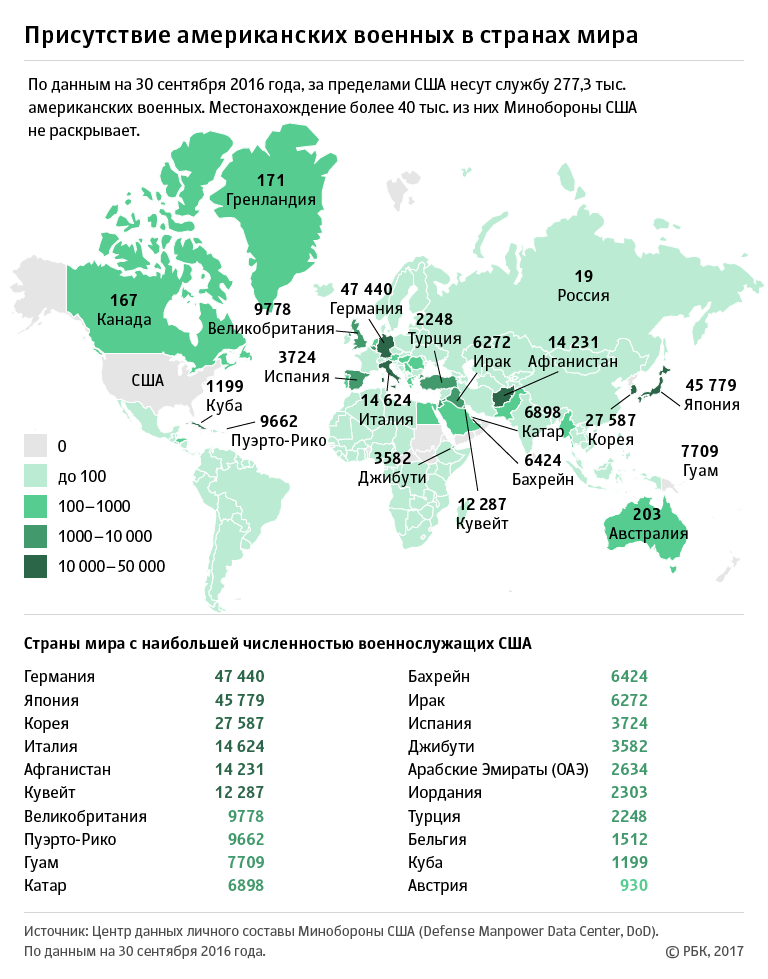