Elena Mizulina from 1995 to 2015 was part of the four convocations of the State Duma from September 2015, it represents Omsk oblast in the Federation Council. According to the website of the state Duma, she was the initiator of the adoption of the 142 bills, the first of which was submitted to the lower house of Parliament on 18 June 1996 and the last on 14 November 2016.

Until 2001 she was a member of the party “Yabloko”, to 2003 the Union of right forces, in 2007 has entered in “Fair Russia”. The most striking and conservative proposals Mizulina occurred during the last of the sixth convocation. During this time she signed ten bills that eventually became laws. Many initiatives Mizulina and the Committee on family, women and children, which she headed, caused rough protests of the public.

The register of banned sites

In July 2012, a law was passed limiting children’s access to illegal information on the Internet, which was created the register of banned sites. One of the authors of the project was Mizulina. According to the law, Roskomnadzor has the right to block pages and sites containing materials with pornographic images of minors, information about methods of committing suicide, on the ground of acquisition and methods of manufacture and use of drugs. The main criticism of the bill was caused by giving regulators broad possibilities of blocking content on the Internet.

“I personally believe that Wikipedia is a cover as terrorists. They are always, as human shield, hide behind children or women. It’s a cover, since Wikipedia itself is hardly threatening. I use Wikipedia. Moreover, please note only English version is closed. Therefore, it is an attempt to blackmail the Russian Parliament. Behind them the lobby, and there are very great suspicions that this pedophile lobby.” Elena Mizulina, July 2012.

Insulting the feelings of believers 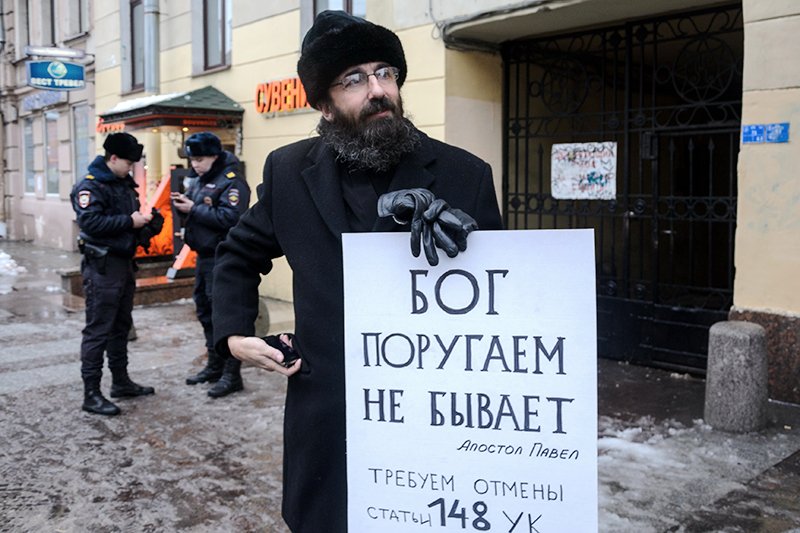 A priest during a rally against the 148-th article of the Criminal code of Russia, November 2016

Mizulina advocated restricting women’s rights to abortion. In 2013, she became one of the initiators of the adopted law, who introduced the administrative liability of medical workers for carrying out illegal abortions. Among the latest proposals Mizulina on the issue of abortion — licensing, ban on free circulation of medicines for abortion, permit abortion only in public hospitals and the removal of abortion from the compulsory medical insurance system and private clinics.

“We do not just checked: I called the hospital, saying: “we need to have an abortion at 15 weeks without medical indications.” In response — “come, such and such price”. Elena Mizulina, September 2013

Mizulina was one of the initiators of the decriminalization of family beating. The state Duma on 11 January approved the first reading of a bill which puts the battery against close relatives from the category of criminal offences to administrative offences in cases where such offense was committed for the first time. Today the beatings committed outside the family and not resulting in serious bodily injury, shall be punished as an administrative offence, and in respect of “close persons” — once in the Criminal code (article 116) and the punishment of two years imprisonment. According to Mizulina, according to the law, the actions applied “to the child light educational measure in the form of a slap” relatives “more socially dangerous than the behavior of a stranger, who inflicted the beatings on the street.”

“Since the criminal case now can be initiated for any reason — abrasion, a bruise in a child would be a good basis to come into the family and even to initiate criminal proceedings against parents. All this will result in unpredictable enforcement practices associated with the unjustified removal of children from the family. This will cause irreparable harm to family relationships”. Elena Mizulina, June 2016.

The ban on baby boxes

In June 2016, Mizulina proposed to prohibit the creation of the baby boxes for the anonymous abandonment of children and punishable by fines up to 5 million rubles for violation of this rule. The bill was rejected by the government because “the suspension of activities of a legal entity may lead to the impossibility of obtaining medical assistance, and social and educational services to orphaned children and children left without parental care”.