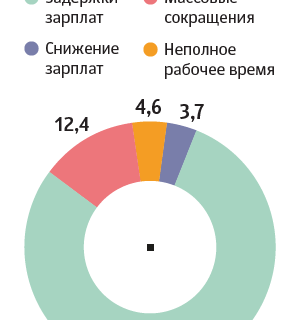 The center for economic and political reforms (capr) made a rating of Russian regions by the number of labor protests, based on Rosstat data, monitoring media reports and its own network of experts. According to the report (), above all the level of social tension in the Primorsky Krai, Sverdlovsk region, Moscow, Khabarovsk and Buryatia.

The most prosperous, according to the study, was the North Caucasus region (with the exception of North Ossetia-Alania Republic, which in the list is on the 5-6th place) and Kalmykia. The low level of labor conflicts in the Russian Caucasus due to the absence in these regions, “Autonomous economy,” and their information closure, said the head of CEPR Nikolay Mironov.

When the rankings take into account three factors: the data of Rosstat, the number of resonance cases of conflict and the number resulting from the labor protests. Just report experts CEPR 1141 have considered the case of labour conflicts, of which 217 escalated into protests, rallies and strikes. Most conflicts – or 82.7 percent — were associated with non-payment and reduction of wages.

In January 2017, Rosstat reported that during the month the level of arrears of wages fell by almost 30% — to 1.1 billion RUB Experts, capr the report questioned the data. According to their information, for example, in the Rostov region, the total debt could not reach the specified Rosstat RUB 35.7 million as debt on salaries is only one of the local businesses, group of companies “Kingcol” amounted to more than RUB 300 million

The report has information about the dynamics of number of labor conflicts. Social tensions in the regions grew in the first nine months, and its peak was in the third quarter of the year (544 resonance of the conflict, compared with 263 in the second), estimated the researchers. In the fourth quarter the level of tension, according to the report, declined. However, the head of CEPR Nikolai Mironov, in comments made that the data on labor conflicts at the end of the year may be incomplete.

According to experts, the rating does not necessarily mean that the government is the worst work in the regions-leaders list. “Of course, the more conflict there, where businesses (in the oil industry) who suffer from the crisis, he explained. — Although the high and subjective: using the fact that [in Russia] crisis, many entrepreneurs begin to deliberately bankrupt the company and “throw” workers”.

At the same time, Mironov is convinced that in the overall study, CEPR accurately reflects the pattern of social tension in the regions. The inability of local authorities to work with the protests leads to the fact that labor conflicts become chronic and “beat on the legitimacy of power,” the expert concluded.

The author of the rating of socio-economic and political tensions of the regions Nikolai Petrov in the comments noted that his data differ from the rating of capr. According to Petrov, it experts say “gradual, not explosive” growth in the number of protests in the regions of”outsiders”. “We are talking about initially quiet regions, not on cities where the level of protests in the principle of high — Moscow, Saint Petersburg, Novosibirsk,” — said Petrov.

Over the last fifteen years, the level of protests increased significantly, that an expert associated with events of the second half of 2016. “Protests has increased significantly and because of municipal reform, and the abolition of direct elections of mayors, and the election in September, when it became much less opposition in the regional legislatures,” said Petrov.

The resonance resolution of labor conflicts often involved the municipal and regional officials, regulatory authorities (Prosecutor’s office, labour Inspectorate). As noticed in capr, in practice, the interference of the authorities often exacerbated the conflict, which speaks about “the lack of Russian-built system of social protests.”

CEPR results three basic scenarios for the response of the resonant power in labor disputes. The first option — “ignorance and opposition.” The most destructive tactics of the authorities, CEPR calls the suppression of the protest without addressing, threats to the activists, the silence on the situation in the media and so on.

As an example, experts cite the case of GK “Kingcol” in the Rostov region in 2016. While salary arrears were still small, the government ignored the demands of the miners. And after the transition of the conflict in the protest stage (meetings, pickets), the authorities began to put pressure on the mining asset and to threaten those who are trying to leave at the rally in Moscow.

The second scenario is connecting power to the problem only after the intensification of the protest. As the conflict is not relieved at an early stage, it creates significant risks for the authority and its reputation.

For example, the case in the Sverdlovsk region OOO “Cast member Verhnesinyachihinskogo metallurgical plant” (VSMZ). From November 2015 to mid-2016 the company has accumulated salary arrears in the amount of 11 million rubles. To secure the payment of debts, employees twice staged a hunger strike. And only in August of 2016 the Governor of the region Evgeny Kuyvashev instructed to bring the situation under control the head of the regional government.

Constructive tactics, CEPR calls the third scenario, when the government solves the problem and does not escalate the conflict. For example, in the Republic of Komi problems with the arrears of wages and holiday payment was JSC “mine “Intaugol”. With the assistance of the regional government has reached an agreement with the Cherepovets GRES for advance payments for purchased coal, which allowed to partially repay debts in November.

Authorities lacking quality and constant monitoring of the situation at the enterprises and in different social environments, summarizes, CEPR. And the sooner the authorities take an active role in solving the problem, the less the probability of transition of the conflict in the acute stage.

In the resolution of major conflicts from the government should act as authoritative representatives who can carry on a dialogue with people on equal terms, “not as a feudal Lord and his peasants,” observed the report. Otherwise workers will try to go with complaints to higher levels of government that will bring the conflict to the Federal level. Experts also point out that censorship in the media is not helping to resolve the conflict and attempts to block information in the media only exacerbate the situation.

Monitoring social conflicts have also shown that in spite of the “vertical of power” impulses “from above” are often ignored or “inadequately” perceived level of the region. “Even when the Federal government takes to solve resonance problems, her advice and guidance “sinking” in endless coordination between agencies and levels of decision-making”, — stated in the report.