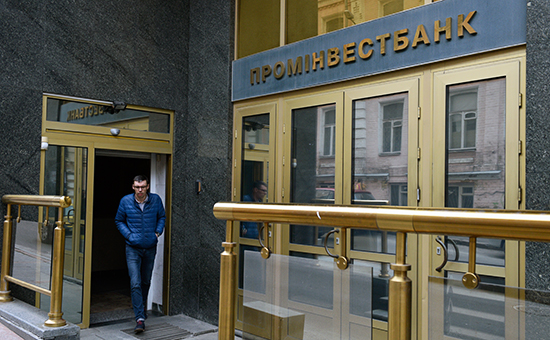 The national Bank of Ukraine (NBU) began its consideration of applications from applicants for the purchase of Prominvestbank, which is “daughter” of the Russian Vnesheconombank (VEB), news Agency RNS.

“In April 2017 packages of documents for approval of direct acquisition of a substantial participation in Prominvestbank filed by two citizens of Ukraine”, — said the Agency representative of the regulator. The NBU RBC confirmed receipt of the application.

Vnesheconombank did not respond to a request to RBC at the time of publication of the material.

In March 2017, VEB Chairman Sergey Gorkov said that among the potential buyers of Prominvestbank is a Hungarian banking group OTP. At the end of April Deputy Chairman of the NBU Kateryna Rozhkova confirmed the existence of potential buyers of Prominvestbank, noting at the same time that the official applications from them, the NBU has not yet been reported. She also expressed confidence that the future of Ukraine, banks with Russian participation, no, but they should be given the opportunity to leave the Ukrainian market “calmly and without panic.”

The identity of potential buyers in the NBU refused to name, having explained that such information will be disclosed according to the results of consideration of applications. Before publishing Liga.net with reference to data of the national Antimonopoly Committee wrote that the owner of the Bank can be a Ukrainian people’s Deputy Maxim Mikitas and founder of developer company MosCityGroup Pavel Fuks.

Fuchs previously owned 21,83% stake in the Russian Sovcombank, which decided to get rid of in may of 2015, wrote Forbes. The publication evaluated the package of the businessman of 4 billion rubles, or about $80 million In April 2017 Fuchs took 24-th place in the ranking of the hundred richest people of Ukraine ($270 million), according to the magazine “Focus”.

With regard to the business career of Maxim Mikitas, he from 2010 to 2016 has served as President of building Corporation “ukrbud”, a major developer of Kiev.

In mid-March, the President of Ukraine Petro Poroshenko has approved the proposal of the national Bank of Ukraine to impose sanctions against five banks with Russian state capital for a period of one year. They touched Sberbank, VTB, BM-Bank, Prominvestbank and VS Bank. Among the introduced measures, a ban on the withdrawal of funds outside the country and any transactions in favor of the parent banks.

At the end of March, the press service of Sberbank informed about the agreement for the sale of 100% shares of Ukrainian PJSC “Sberbank” consortium, which included the Latvian Norvik Bank (shareholder Grigory Guselnikov) and Belarusian private company owned by the son of the principal owner of the company Rosneft and the group Safmar said Gutseriev. Two businessmen — citizens of the UK. On 12 April the national Bank of Ukraine has received documents for approval of the sale of “daughter” of Sberbank consortium of investors, said the press service of the regulator.

Official information on submitting applications to the NBU Ukrainian “daughter” VTB has not yet been. At the end of April, the head of VTB Andrey Kostin during a meeting of the shareholders said that the Ukrainian authorities continue to place a jar of “stick in the wheel and in the process of leaving from the market”. Bank “VTB Ukraine” suffered significant losses, then admitted Costin. “Our goal was to minimize losses, to give money and almost freeze,” he said.