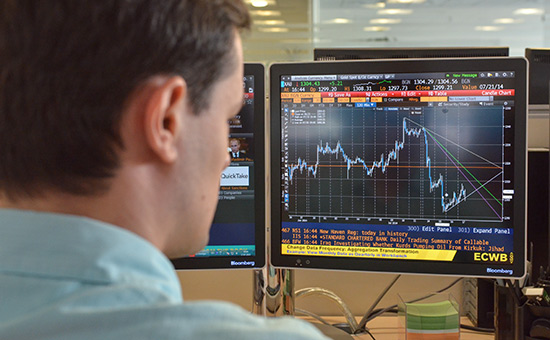 The Central Bank said the cessation of the excessive demand for OFZs from non-residents. In April, sales by foreigners of Russian government bonds in the secondary market exceeded purchase. Experts expect the weakening of the foreign interest in such securities will continue

The Bank of Russia announced the termination in April observed in March, demand for Federal loan bonds (OFZ) from non-residents. As stated in a report published on Thursday, may 18, review of “the Liquidity of the banking sector and financial markets”, in April in the secondary market for the sale of Federal loan bonds by non-residents exceeded purchases. In the end, net sales amounted to approximately RUB 5 billion, said the regulator.

In April, the situation has changed due to the fact that foreign investors were afraid to invest in risky assets because of rising geopolitical tensions and the likelihood of the weakening of the ruble after a substantial strengthening in the second half of March to the review of the Central Bank. “However, these concerns have faded into the background after the statement of Bank of Russia about intention to reduce the key rate: for the remaining ten days of the month, foreign investors bought the BFL for another 34.4 billion rubles., and their yield decreased by 15-40 b.p.”, — notes the regulator.

“In March in addition to internal drivers of growth of demand for OFZs, such as lower inflation and a softening of rhetoric of the Central Bank, the inflows of non-residents on the market contributed to the revision policy of the fed, and in April the demand was supported only by internal factors”, — says the analyst of Promsvyazbank Roman Nasonov. “At current yield levels and the exchange rate, the potential for purchases of OFZ bonds by non-residents decreased”, — said Nasonov.

The last time a negative net worth from non-residents was in February 2017 and amounted to RUB 7 billion.

The share of nonresidents in total volume of OFZ started to rise gradually from February 2015, the company on April 1, 2017 (the latest published data) value of 30.1% (or 1.8 trillion of 6.0 trillion). The results of the investments of foreigners at the beginning of may will be published in early June. “Demand in the past recent OFZ auctions may have been extremely low,” says principal analyst debt markets brokerage company “Region” Alexander Ermak.

The experts pay attention to a decrease in appetite of foreigners to OFZ in 2017 for the second straight month in may, according to their estimates, they also sold these securities. “The reason sales OFZ — resident in the ruble exchange rate dynamics in the dynamics of oil. In early may, we have witnessed a significant drawdown in oil (from $52 to $48 per barrel of Brent oil), the ruble weakened from about 56 to 58,5 rubles per dollar in early may. Against this background, the yield of OFZ grew up (around the levels of about 7.5 to 7.7% per annum on 10-year paper), which probably suggests that non-residents could sell OFZ” — analyst IK “Aton” Yakov Yakovlev.

“In early may we saw a correction in some OFZ issues. OFZ yields in early may (first week) increased by about 0.2 p. p. This may indicate that the risks of sales in this market increased and investors began to prepare for the new correction,” — said the head of Department on work with wealthy clients of IC “Zerich capital Management” Andrey Khokhrin.

The decline in demand of foreign investors in OFZs can be explained by expectations of rising interest rates in the United States, as well as risks of lower oil prices that may lead to the weakening of the ruble. “Non-residents in April were taken into account the uncertainty in connection with contradictory statements from OPEC (statements regarding the extension of the agreement to limit oil production within OPEC+). In such a situation, investments in OFZ bonds lose their attractiveness” — says the analyst of group of companies “Finam” Bogdan Zvarich.

In addition, rising US interest-rate to 0.75–1% and reduction in Central Bank key interest rate to 9.25% leads to a decrease in the attractiveness of carry trade operations, said Zvarych. Due to the high rate of the Central Bank we have a high rate on OFZ — above 8%. It helps to obtain high yields, which is in dollars. Nonresidents convert them into rubles, receive the return and translate it into currency.

Another reason for the weakening of interest of foreigners to Russian debt are geopolitical risks, which lead to the exit of investors from risky assets, experts say. Alexander Ermak indicates a negative situation on world markets associated with dissatisfaction with the policy of trump, which leads to a reduction of investments in risky assets. Thus, the yield on 10-year U.S. Treasury bonds (US Treasuries) for may 16-17 has decreased from 2.35 to 2.24% per annum, said Yermak.

Andrew Khokhrin explains that before market participants, including foreign ones, have actively invested in Russian government bonds, expecting lower inflation to the target rate of the Central Bank is 4%. “In may, annual inflation had reached this level (inflation from January to April of 2017 made up 1.31%, per annum equal to 3.93%). Investors have an understanding that for a developing market-4% is the minimum value and then inflation will increase,” says Khokhrin.

Impact on the ruble

However, the sales so far, market participants believe. “To talk about the departure of non-residents from the market, we should see three things: the drop in the price of long bonds, the appreciation of currency swaps and a sharp weakening of the ruble. In case of simultaneous occurrence of these three events with a high probability we will see a drop in demand of non-residents on the OFZ,” — said the head of asset management National management company Andrew Vallejo-Roman.

Until the end of the year, according to estimates by Sberbank CIB, the proportion of foreigners on the OFZ market will decline, says the analyst of Sberbank Investment Research Nicholas Minko. At the end of the year it may decrease by 4 percentage points to 26%, he adds. However, Minko expects that the reduction of inflows from non-residents will be replaced by the increasing appetite of Russian banks to Federal loan bonds. “If the inflow to a lesser extent will go from non-residents, to a greater extent it will need to be offset by other categories of investors,” agrees chief economist at the Eurasian development Bank (EDB) Yaroslav Lissovolik.

“Possible flow of funds of non-residents to other markets in search of higher yields. Besides the factor of yield is important decrease in risk factor and exchange rate volatility. A large part of the previous year, we observed a reduced volatility,” says Lissovolik.