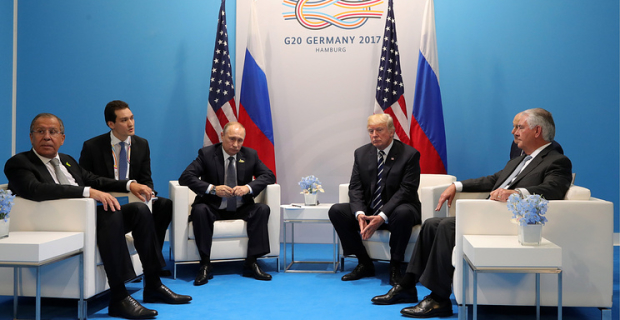 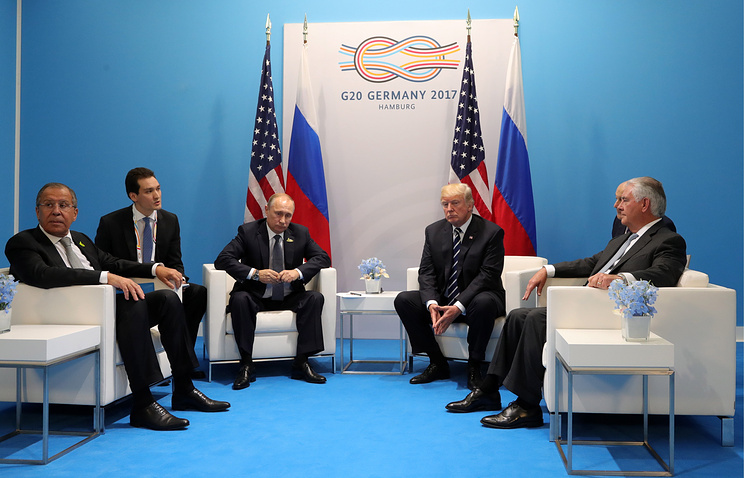 July 7, at the G20 summit in Hamburg hosted a meeting of presidents of Russia and USA Vladimir Putin and Donald trump. The conversation the two leaders took place in the Congress center without the presence of the press and lasted 2 hours and 15 min. She became the first personal meeting of presidents, to leaders communicated only by phone. Putin and trump spoke in favor of the development of dialogue between the two countries. The reaction of Russian politicians to the first meeting of the two presidents at the TASS.

The speaker of the Federation Council Valentina Matviyenko called the meeting of Vladimir Putin and Donald trump detailed. According to the Senator, she showed the interest of heads of States in solving global problems.

“By itself, the meeting of a great political event, it is not about the Protocol handshake, and a serious and thorough conversation,” she said. The Senator has noticed that during the meeting, almost all of the key discussion topics was agreed. “I think that’s a result of personal contact, sincere interest of heads of States in solving global problems,” – said the MP.

According to Matvienko, in both countries and throughout the world people understand that confrontation may not be productive. “The meeting can be a step towards the exit from the situation, which came in Russia’s relations with the United States,” – said the speaker.

According to the MP, it is now necessary to restore the dialogue of both the Executive and legislative authorities of Russia and the United States. Matvienko assured that the Russian parliamentarians are ready to resume contacts with American colleagues.

To open the barricaded door

Meeting of the presidents of Russia and the United States in Hamburg was a major step forward in relations between States.

“In a sense, this is a breakthrough. Made exactly – psychological, perhaps, in practical terms,” – said Kosachev.

According to him, the meeting was “was a lot of specifics”.

“Russia and the United States start or interact in practice [Syria] or discuss [Ukraine, cybersecurity] critical issues defining the nature of bilateral relations”, – said the Senator. “The key to assess [the foreign Minister] Lavrov, both of the President focused not on confrontation but on the achievement of mutually beneficial agreements,” – said Kosachev.

“If there is such a feeling of understanding will appear sooner or later”,- said the MP.

The first meeting of Vladimir Putin and Donald trump may be the beginning of a process of ending the degradation of Russian-American relations and will contribute to the “common denominator” in the key dossiers the global agenda. On Friday the journalists said the head of the Duma Committee on international Affairs Leonid Slutsky.

The search for consensus

Meeting of the presidents of Russia and the United States showed that the agreement between Moscow and Washington on a number of important issues. This opinion in an interview with TASS was expressed by the Chairman of the Board of the Fund of development and support of the club “Valdai” Andrey Bystritsky.

The expert described the results of the meeting leaders is encouraging. “They give reason to assume that it is possible to achieve agreement between the US and Russia on a number of important issues,” he said.

The main result of the meeting, according to the Bystritsky, was “the agreement on Syria which allows us to hope for expansion and further transformation of the Syrian military conflict in the political process”. “Russia and the USA can make a difference in this region, he said. – In itself the Syrian issue is a very important model problem, which allows to hope that in the future the great powers will be able to interact and effectively work towards conflict resolution”.

The expert drew attention to the duration of the negotiations, which was about 2 hours and 15 minutes. “The duration of the meeting, that it went far beyond pre-planned, shows that presidents have something to discuss, and what to look for consensus,” he said.

As pointed out by Bystritsky, although on some issues, including on the Ukrainian issue, concrete decisions it was accepted not, “it is important that the presidents of Russia and the United States more closely coordinate their actions on this issue”.

The benefit to all countries

The results of the meeting of the presidents of Russia and USA Vladimir Putin and Donald trump in Hamburg will benefit all countries who bear the damage of the confrontation between Moscow and Washington. This opinion in an interview with TASS was expressed by the editor of the American edition of Al-Monitor, expert club “Valdai” Maxim Suchkov.

“The winner of the meeting is neither Putin nor trump, and Russia, the United States and those countries for whom the continuing confrontation is painful and carries only the political, economic and other damage,” he said.

The expert added that the value of the first meeting of leaders of Russia and the USA “it is difficult to overestimate, especially when waiting for her for so long, but the problems between these States so much.”

While Knots stressed that, despite the lack of direct contact between trump and Putin for more than six months from the date of joining trump as President reached Friday agreement – “an indicator of how closely and constructively work teams of the two States behind the scenes, including the Syrian track”. “Decisions such as the establishment of a new zone of de-escalation in the South of Syria with the participation of Jordan, preparing more than one week and require enormous political will on both sides, – said the analyst. – Given that we live in a time of total information leakage and stuffing, to preserve the confidentiality of these consultations, it was not easy, and bearing in mind the pressure on the administration trump, keep it was needed.”

However, to talk about the success, according to experts, it is necessary with caution. “It’s important to remain realistic in evaluating the risks and obstacles that are on the way of implementation of their agreements “on the ground”, and not to abandon their agreements if these agreements for some reasons beyond the sides of reason will be violated,” said Suchkov.

The interlocutor of the TASS added that “the expectations of the Kremlin and the White House after a meeting of leaders of similar and even symmetrical to the opposite side adhered to those obligations that it assumed in agreeing to the relevant paragraphs of the agreement.” “If all or a large part of what was agreed between the presidents, will be realized for both parties that will win,” he concluded.