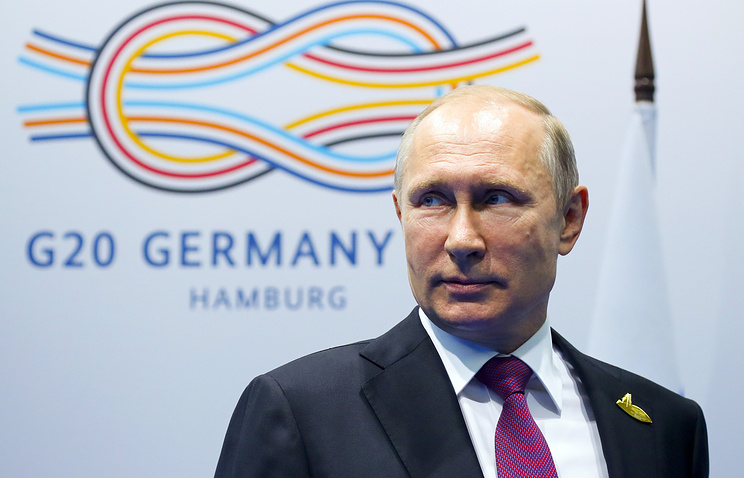 HAMBURG, July 8 /TASS/. Russian President Vladimir Putin believes that the Russian economy has emerged from recession. The head of state said at a press conference following the summit of “Big twenty” in Hamburg.

The President expressed confidence that the growth of the economy will be fixed. “Of course, we cannot say that this trend [growth] is absolutely stable, we should follow closely in order to support it,” he said. “I have every reason to believe that we will succeed”, – stressed the head of state.

The head of state noted that the country’s economy is growing the third and even the fourth quarter in a row. “The growth of the Russian economy exceeded 3-3,1%, I think that we will have in average a year by 2017 2% increase” – predicts the President.

In his opinion, “this is a significant contribution to the growth of the economy.” The President also recalled that Russia “is low unemployment at 5.2%, grow reserves, including Central Bank reserves, government reserves. The Central Bank’s reserves had grown to $412 billion, a 40% increase in the revenues of the Federal budget.” “It’s all on the back of relatively low inflation of 4.4%. All of this together, of course, can not inspire optimism,” Putin believes.

The plan for the economic development of the country

Meanwhile, Putin said that a plan for the development of the economy should be based on the version of the Cabinet of the Russian Federation, but to incorporate elements and other projects. “We are watching what will be the final version of the proposals for the development of the Russian economy, starting in 2018,” – said the head of state. In his opinion, while the plan is not ready to talk about its provisions is not necessary.

Putin believes that “the government has done a lot of work in this direction [training plan]”. “We will largely be based on the proposals of the government,” he said, adding that other proposals can also be taken into account.

The President said that the plan has several groups. “Working group headed by Mr. [Boris] Titov [the Commissioner for protection of entrepreneurs’ rights] working group headed by Mr Alexei Kudrin [the head of the Center for strategic research], he there gathered a large number of authoritative experts, government works,” he listed the head of state.

According to Putin, “we need to make a plan that would be acceptable, would be the best for the next steps in the economy, starting in 2018”. “We need to look at all proposals, to evaluate them and ultimately make the final decision,” – said Putin.

In the opinion of the President, “maybe it will not be a specific of these proposed options, maybe it will be something that will be based on these three options.” Putin added that it is impossible “to ignore what made the group of Alexey Kudrin”. “And Titova, there are sensible proposals,” he added. “Therefore we are watching what will be the final version of the proposals for the development of the Russian economy, starting in 2018,” said Putin.

The head of state assured: “There are no secrets there, just the fact that to declare in advance that was not definitely accepted, this is wrong.” “We can file just the wrong signals in the economy,” he explained.

Growth in the global economy

The President also noted the movement toward growth in the global economy. “Though somewhat reduced from the original optimistic forecasts growth, but still growth, growth is evident, including in Russia,” said Putin.

“The adverse trends we have already hardly see. There are factors that do not contribute to the development of the economy, including the global economy and in the Euro area and Russia – these are the illegitimate restrictions”, – said the head of state. “We are in favor of lifting any restrictions, freedom of trade, to work within the framework of the world trade organization under WTO rules”, – he stressed.

The Russian leader said that “one of the themes in the economic field under discussion (at the summit), was freedom of trade and fight against protectionism.”

The head of state noted that the cost of delivering gas to Europe from the US is incomparably higher than the Russian, Moscow is counting on a competitive advantage. “I see it (trump’s statement about the US intention to break the “monopoly power” in Europe – approx. TASS) highly positive, because healthy competition is all good. We are for an open market, a healthy competition, – said Putin. – Today it is quite obvious, any expert will tell you this, the cost of production and delivery of liquefied natural gas from U.S. to Europe much higher than our LNG, and is not comparable to the cost of pipe Russian natural gas.”

The Russian President said that he supported a thesis of the American leader is Donald trump. “It’s fine with us, if this is so, open and fair competition, not biased politics and without the use of political resources,” he said. Putin added that he does not doubt that Russia has a clear advantage, but they remained, according to him, market participants have to work actively.