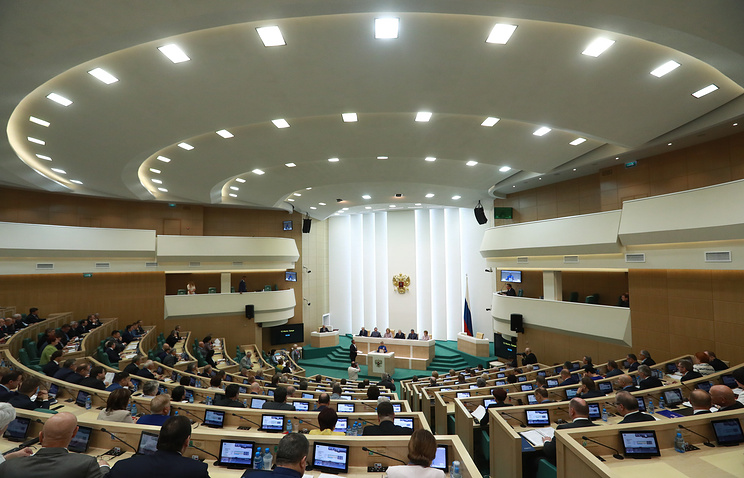 MOSCOW, July 25. /TASS/. The Federation Council will meet on Tuesday for its last meeting of the spring session. The senators have to consider more than 70 laws, including laws on the introduction of a resort fee and oath taking citizenship of the Russian Federation.

It is expected that in the beginning of the session senators will accept an appeal in connection with the Polish law banning the promotion of communism or another totalitarian regime, which provides for the dismantling of monuments to Soviet soldiers who liberated Poland from Nazi occupation in the years 1944-1945. In their draft statement, in particular, contains a proposal to Russian President Vladimir Putin to consider the adoption of restrictive measures against that country.

Also, the MPs will discuss the introduction of resort fees in four Russian regions: in the Crimea, Altai Krai, Krasnodar and Stavropol territories. The law provides for these regions in the years 2018-2022 experiment on the development of the resort infrastructure to conservation, restoration and development of resorts of formation of uniform tourist space and the creation of favourable conditions for sustainable development of tourism. In these constituent entities of the Russian Federation introduced fees for use of resort infrastructure and defined the resort fee (50 to 100).

The same law establishes that if the purpose of obtaining citizenship was the activity against the constitutional system of the Russian Federation, and the person has committed a crime of a terrorist or extremist, it is understood as the submission of false information. Entered into force verdict of the court for these crimes would be grounds for revocation of a decision on granting citizenship of the Russian Federation.