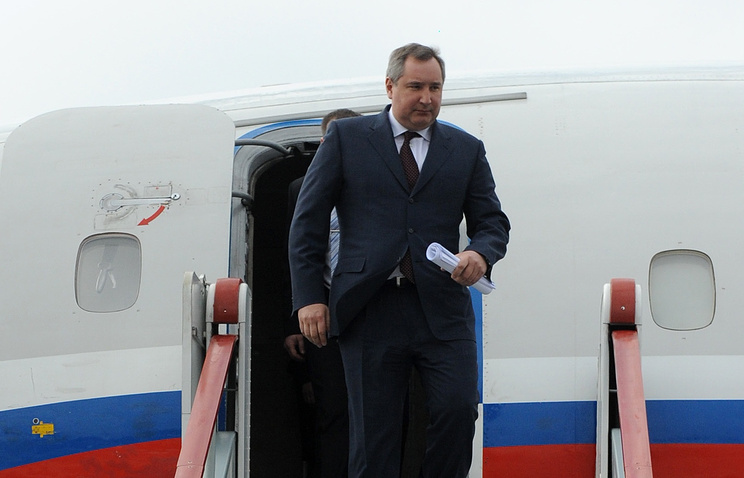 MINSK, July 28. /TASS/. The visit of the Vice Prime Minister Dmitry Rogozin in Moldova on Friday was disrupted because Romania refused to miss a scheduled flight with the Russian delegation. The plane landed in Minsk, after which the Chairman of the Russian government went to Moscow regular flight “Aeroflot” from the capital of Belarus.

Russian Deputy Prime Minister went to Chisinau, to hold talks with President of Moldova Igor Dodon at his personal invitation. The next day, together with the head of Moldova he was planning to go on a Bender, where there will be activities on the occasion of the 25th anniversary of the peacekeeping operation on the Dniester.

The representative of the Romanian foreign Ministry for press confirmed to TASS that the plane, which was Deputy Prime Minister Dmitry Rogozin, was not given permission to fly in the airspace of the country. “We confirm that Romania does not agree [with the flight of the plane with a Russian representative – approx. TASS],” he said, refusing to explain the reasons for the refusal.

Rogozin’s reaction to the actions of Bucharest has not forced itself to wait. “The Romanian authorities have endangered the lives of passengers of airliner S7, women and children. The fuel was enough to Minsk. Wait for an answer, you bastards” – he wrote on his Twitter page.

In an interview with TASS Deputy Prime Minister said that on Friday morning the leader of Moldova Igor Dodon said all the details of the visit with the Ambassador of Russia Farit Muhametshin. “In fact, it is also a move to address the Moldovan President,” – concluded Rogozin.

According to Rogozin, the decision about the flight to Moldova scheduled flight was due to the incident, which occurred on a Charter plane, which the Deputy Prime Minister flew to Chisinau a few years ago and that the Romanian authorities tried to force to fit. “In later times we, in principle, successfully used the services of this (S7 civil – approx. TASS) airline, never had any problems, he explained, adding that the routes of the airline was laid in an overflight of Ukraine. – Problems with cross Belarusian, Polish, Slovak, Hungarian, Romanian space did not arise”.

Rogozin said that “at this time, the managers of Romania from Bucharest contacted the Board, in order to clarify the list of passengers and to confirm that the Board is the delegation and its leader”. “Forbidden to enter the airspace, – said Deputy Prime Minister. – When the pilots contacted the Budapest and tried to negotiate, because the fuel on Board is limited, for transit landing at the airport of Budapest, so that the aircraft could continue to come to Chisinau by the Romanian space, and the question of the delegation would be decided after consultations with the Russian Ministry of foreign Affairs, Hungary also refused and in transit through their space, and landing in Budapest.”

According to Rogozin, in connection with the situation (including the ending of fuel and on Board a large number of children and women), the flight crew contacted him. “The decision was made to go to a safe alternate airport to Minsk in order to carry out the necessary refueling and from the earth to contact the authorities for further flights of the aircraft in order to achieve a smooth delivery of the passengers of the aircraft,” – said Deputy Prime Minister.

The head of the Russian delegation added that on Board the aircraft contacted the Russian foreign Ministry and Federal air transport Agency, information about the incident aerial incident was transferred. “All conclusions will be made” – promised Rogozin.

The reaction of the President of Moldova

Igor Dodon in an interview with TASS expressed the view that these actions are “directed against cooperation with our strategic partner, which is actively restored after meetings between the presidents of Moldova and Russia”. “As well as against settlement of the Transnistrian problem and restore the territorial integrity of the Republic of Moldova, where there had been positive developments,” said Igor Dodon.

He recalled that he had planned to discuss with Rogozin, who is the special envoy of the Russian President for Transnistria and co-Chairman of the Russian-Moldovan intergovernmental Commission, strengthening cooperation between the two countries. Also it was planned that the head of Moldova together with Rogozin will travel to Bender, where on Saturday there will be events on the occasion of the 25th anniversary of the peacekeeping operation on the Dniester. There was held a meeting with the head of the unrecognized Republic Vadim Krasnoselsky.

Previously around the visit of Vice-Premier of Russia in Chisinau scandal. On the eve of the Ministry of foreign Affairs and European integration (MFAEI) has indicated to the Russian Ambassador Farit Mukhametshin on “the inadvisability of carrying out unilateral” actions on the occasion of the anniversary of the peacekeeping operation. The Ministry recalled the position of the Moldovan government, which insists on the replacement of Russian peacekeepers with a multinational mission of civilian observers. For its part, the Prime Minister Pavel Filip, representing formed the ruling Pro-European coalition of Democratic party welcomed the visit of Rogozin. But noted that “his arrival at the military aircraft impossible”. The official commented to local media that the Russian delegation is scheduled to arrive on transport of the Ministry of defence of the Russian Federation. Although Rogozin called this information “nonsense”, a group of Moldovan activists urged the government to declare Russian politician persona non grata and posted an online petition in support of this initiative.