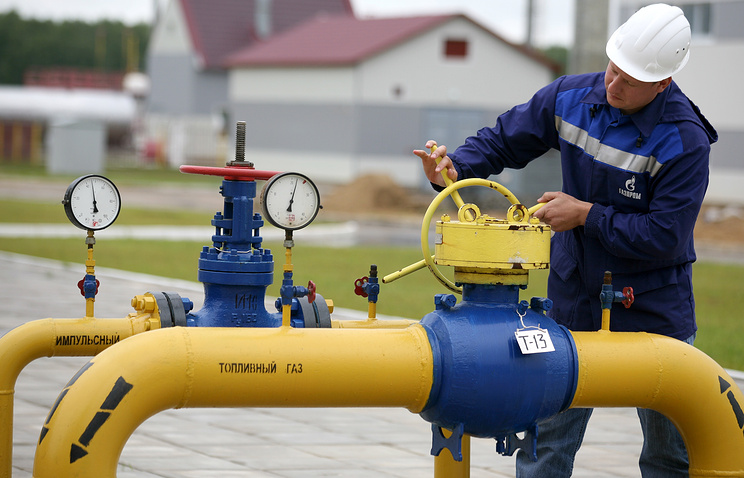 MOSCOW, August 9. /TASS/. Gazprom is watching a good momentum of gas exports to Europe through a gas pipeline OPAL download of the “Nord stream” exceeded 90%, with transit through Ukraine even increased, told journalists the Chairman of the Board of the Russian gas holding Alexey Miller.

“In the period from August 1 to 8 download of the “Gazprom” gas pipeline OPAL has increased by 30%. Today, the pipeline reached its full capacity. The volume of daily gas supply in GIS “Greifswald” on August 8, reached 140 million cubic meters, that is, the use of “Nord stream” has exceeded 90% of design capacity. And this summer! This indicates a high demand for this export route and its continuation – OPAL. It full download – is an objective necessity of the market from our European customers,” he said.

Answering the question about the claims on OPAL, which was down to the fact that it will affect the use of Polish transit capacity, Miller said, “Demand for Russian gas in Europe is objectively very high. And “Gazprom” maximally exploiting available export routes. Download gas pipeline “Yamal – Europe” through the territory of Poland in the first week of August, despite the work of the OPAL remained at the maximum level. And on the Ukrainian corridor was observed even increasing the volume of transit through Velke kapushany on the Ukrainian-Slovak border”.

The head of “Gazprom” noted that the state of the Ukrainian gas transportation system (GTS) can not guarantee reliable supplies of gas to Europe in the medium and long term.

Commenting on the statement of the Ministry of energy of Ukraine about possible problems with gas transit through Ukraine due to chronic under-investment in the transportation system, he said: “We have been talking about it. The state of the Ukrainian GTS is that nobody can guarantee a reliable gas supply to European consumers through Ukrainian corridor in the medium to long term. Our partners in Europe know it. And finally, the Ukrainian side is recognized. And publicly, officially announced about possible problems with the transit because of underinvestment in gas transport system. This again shows that for stable maintenance of the European countries Russian gas is absolutely necessary for more modern and efficient export routes.”

Earlier, Minister of energy and coal industry of Ukraine Igor Nasaliki declared that the company “Ukrtransgaz” may be technically unready for gas transit in the future because of the policy of reduction of investments into the Ukrainian GTS company “Naftogaz of Ukraine”.

The story of OPAL

The gas pipeline OPAL with a capacity of 36 billion cubic meters a year connects Nord stream with the gas transmission system in Central and Western Europe. Gas flows to Germany to the Czech border.

In July, the European court and the Higher regional court of düsseldorf has lifted an interim measure on the use of “Gazprom” capacities of the OPAL gas pipeline imposed at the suit of the Polish PGNiG. After that, the Federal network Agency of Germany has allowed access to additional capacities of the gas pipeline. Thus, once again begins to act the permission of the European Commission, according to which “Gazprom” in 2016 gained access to 90% of the capacity of OPAL.

Earlier “Gazprom export” said that after the lifting of interim measures for access to OPAL will have the opportunity to participate in these auctions and reserve power.

Until last year, Gazprom could only use half of the capacity of OPAL. Although in 2009 the European Commission agreed to exclude OPAL from under regulation, but under condition of carrying out of auction on the Czech market in terms of the regulator. Gazprom did not agree, and 50% of the capacity of OPAL was frozen – that is reserved for other gas companies. But alternative suppliers and was not found. In the fall of 2016, the European Commission still gave Gazprom access to almost the entire volume of the pipe, and the remaining capacity, it was decided to put up for auction.

However, the Polish energy company PGNiG and the Polish government appealed to the European court to appeal the decision. In proceedings was adopted interim measures, which the European Commission’s decision was suspended.

First daily auctions for the available capacity of the gas pipeline branch OPAL passed 1st of August – with reservation for August 2nd. Wednesday download of the OPAL pipeline after the removal of legal restrictions and the first auction has increased from 58% to 95% at the entry point in Greifswald. According to the operator of the pipeline, 9 Aug download reached 43.5 million kW/h, which is 95% of the pipeline capacity.