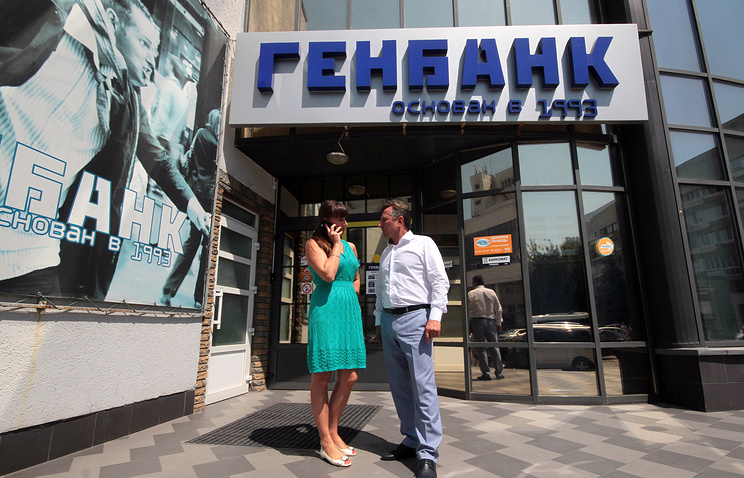 TASS, August 10. The arrival of a new investor in the Crimean GenBank stabilize the financial situation in reference to the Peninsula Bank and improve the quality of its management. According to the representatives of the financial organizations and the authorities of the Peninsula, the new shareholder will allow the program to expand lending to the real sector and the population, including lower interest rates than existing on the Peninsula.

On Thursday, the Bank of Russia to increase the financial sustainability of the Crimean GenBank decided to involve as the investor credit institution Sobinbank – daughter of the Bank “Russia”. At the same time the regulator has entered into GenBank interim administration to ensure the continuity of GenBank for the period up to its transfer to the investor.

GenBank was created in 1993 (formerly MBank). From 2015, 50% belongs to the authorities of Crimea and Sevastopol. GenBank became the first Russian commercial Bank which began work in the Crimea after reunification with Russia in March 2014, is under U.S. sanctions. Today on the Peninsula opened more than 190 outlets, installed more than 450 ATMs, 140 cash offices and more than 1.1 thousand POS terminals.

To solve the problem

As reported TASS the press service of the regulator, the investor was determined based on the results of the talks with Russian banks operating in Crimea and Sevastopol. Representatives of the banking group “Russia” is already working in the composition of the interim administration.

As noted in Central Bank, GenBank had accumulated some problems with financial regulation, and quality control. “The Bank of Russia, taking the decision about attraction of the new investor, based on the fact that it will prevent the loss of Bank financial soundness and own funds, will allow us to solve the current problems of the Bank, and the interest of investors in business development in the region will improve the quality and availability of financial services for enterprises and population of the Crimea”, – said the press service of the regulator.

Commenting on the scheme of financial rehabilitation of the Crimean Bank, the Bank of Russia announced that in the interests of economy of Crimea and Sevastopol was deemed preferable to transfer the management of the Bank in the hands of an interested market player with experience in the region to implement measures for financial rehabilitation in the framework of the credit scheme of rehabilitation. “As the banking group “Russia” on financial capability far exceeds the GenBank, the disadvantages of credit schemes of reorganization in this case offset”, – stated in the Central Bank.

The investor has not sought financial support because it has sufficient own resources to meet the needs of GenBank, including the issuance of new loans, said the press service of the regulator.

There is no threat

The head of the Crimea Sergey Aksenov said that the threat to depositors of GenBank in connection with the involvement of a new investor in the person “Sobinbank” no, the government controls the situation. According to him, attracting a new investor will benefit residents of the Crimea. “The procedure will help to create a stable structure, with the result that Crimeans will receive an additional product line. I think a more balanced interest rate,” – said Aksenov.

He also said that the government of the Republic for the last years carried out a number of measures to improve the financial sustainability of Genebank, which is one of the main financial instruments of the Republic. In the Crimea are interested in the further work of the Bank and increase its capitalization, said Aksenov.

Loans will be available

As reported TASS the press service of the GenBank, the organization continues to work in normal mode and perform all the obligations to depositors promptly and in full. The press service also stressed that the involvement of Sobinbank as an investor “will allow the program to expand crediting of priority importance for the economy and population of the Crimea Peninsula, and to increase the range of banking services.”

In the credit organizations are sure that the involvement of the investor will allow the Genebank to continue to “build as one of the leading banks of Crimea”. Peninsula authorities expect the involvement of an investor of a professional participant of the banking market will allow to ensure the stability of the Bank, and further subject to the measures of capital increase – to expand the list of rendered banking services and lending to the real sector of the economy and residents of Sevastopol. In particular, this was stated in the government of Sevastopol.

The government of the Crimea, TASS reported that by the end of next week the regional authorities will hold talks with a new investor. It will go on reducing interest rates. “Lending rates in the Crimea today is higher than on the mainland. With a new investor in the GenBank we will discuss the dynamics of the reduction [in rates] by the end of next week”, – said the representative of the Crimean government.

He said that by the end of next week will be submitted to the banking statistics interest rates on loans in comparison with mainland Russia.