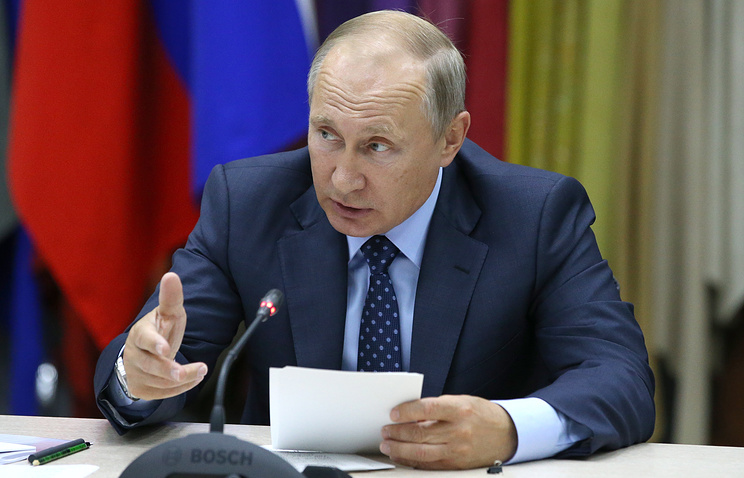 RYAZAN, August 24. /TASS/. One third of products of light industry produced or imported into Russia illegally. This was stated by the President of Russia Vladimir Putin at a meeting on measures to develop light industry in Russia, calling the counterfeit one systemic and chronic problems of the industry.

“We are talking about the fight against counterfeiting and smuggling, which not only undermine competition in the domestic market, but also are a clear threat to the health of consumers”, – said the President. “In 2013, when I raised this issue, the share of illegally produced and imported products accounted for 39%, or about 1.1 trillion rubles, today it has decreased, but only to 33%,” – said Putin.

“Note that the dynamics for three years unconvincing, and would like to know how to solve this problem,” Putin said.

The head of state offered to discuss what protective measures you need to take extra to block the flow of these illegal products. He added that counterfeit and smuggled goods “in fact, devalue, devalue measures to support those working in the legal field”.

“It is in the sweep of the market from dubious products concluded, in my opinion, the most important resource for the development of light industry”, – said the President.

Putin also proposed to discuss the issue of supplies to the domestic market. According to him, it is necessary to adopt flexible solutions, which “will stimulate your own production of raw materials, will also allow you to close the current needs of processors. “In this connection I propose to discuss the launch of a separate phdprogram in the state program of agriculture”, – Putin suggested. The President also urged to study the issue of removing unnecessary barriers to imports of foreign raw materials, in cases where it is objectively necessary.

According to the President, it is necessary to increase the personnel potential of light industry enterprises, to revive the prestige of the professions, to attract young professionals. “Today the main educational institution on this profile are concentrated in Moscow, while production capacity – mainly in the regions. Staff needs to be trained where there is practice. I propose to consider the possibility of opening of special departments at leading enterprises of the industry”, – said Putin.

The President also drew attention to the discrepancy between the dynamics of wage growth in the industry with the dynamics of developing products for one person: since 2013, this production has increased by 60% in that time, wages were about a third and amounted at the end of 2016 to 18.6 thousand rubles in average for the industry. “This is much lower than the average for the Russian economy”, – said the head of state. He proposed to discuss how to resolve this imbalance and to attract young employees to the enterprises of light industry.

The solution to the problems of the industry

The head of state noted that problems in the light industry a lot of the country’s leadership will try to solve them.

“Issues and problems in the industry very much, but the main topics we have touched on. We all try to reflect in the appropriate instructions, formulate, and again would ask you about the wording with the heads of departments. I think that we are not gathered here in vain, because even in ninety-minute conversation, we had the opportunity to walk the main issues”, – Putin addressed the participants of the meeting.

During the meeting, problems were discussed in the light industry of the Russian Federation related to the problem of counterfeit goods, taxation, subsidies, import went, issues of training specialists for light industry in Russia and many others. A number of remarks, the President instructed the relevant ministries to prepare relevant instructions. “I repeat, then fix it in the instructions and try to make sure that they were executed. I hope that all of what we talked about and agreed to will benefit the development of the industry”, – stressed the head of state.

He added that a 6% growth in the industry in the first half is a very good indicators.