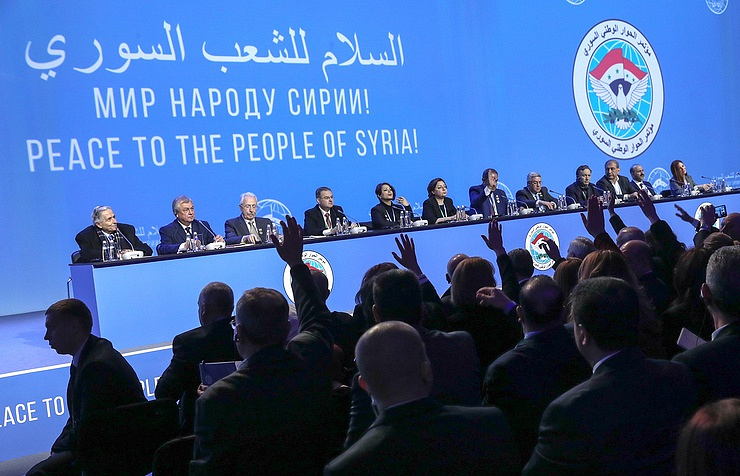 SOCHI, January 30. /TASS./ Members of Congress of the Syrian national dialogue in Sochi, said that their main goal is to stop the conflicts and restore peace to Syria. This is stated in published Tuesday on the website of the Ministry of foreign Affairs of the Russian Federation the appeal of the participants of the Congress.

“We, the participants of the Congress of the Syrian national dialogue, expressed the common desire to put an end to the ongoing conflict, the document reads. We all share the same goal – to bring peace and prosperity to our Homeland and live peacefully with each other without violence and terrorism in all their forms and manifestations”.

The statement said that Syria needs a strong and unified national army, performing tasks in accordance with the Constitution of the country.

“Strong, United, credible national army is performing its tasks in accordance with the Constitution and the highest standards, – the document says. Its function is to protect the national borders and people from external threats and terrorism, while the special service and security needs to support the national security in accordance with the principle of the rule of law, to act within the Constitution and the law and to respect human rights. The use of force should be the exclusive prerogative of the competent state institutions.”

The role of the UN in the reconstruction process in Syria

The statement clarifies that the decision on the mandate and criteria for the selection of members of the Syrian constitutional Commission will be made in the framework of the Geneva process, it will include representatives of the government and the opposition.

“The constitutional Commission will include, as a minimum, representatives of the government and the opposition participating in the intra-Syrian talks, experts on Syria, civil society representatives, independent representatives, tribal leaders and women. Measures will be taken to ensure that the composition of the Committee was represented in proportion to ethnic and religious groups. The final decision on the mandate, operation, powers, rules of procedure and criteria for selection of members of the constitutional Commission will be made in the framework of the Geneva process under the auspices of the United Nations”, – the document says.

Plans to return the country to prosperity

Members of Congress of the Syrian national dialogue in Sochi was resolved to preserve the cultural heritage of the SAR and return the country’s well being. This is also stated in the published document.

In the tenth paragraph of the document it is noted that of particular importance to the Syrian society has a “history of its diversity and the contribution and values that all religions, civilizations and traditions brought to Syria.”

In the next paragraph says about the “combating and eradicating poverty, supporting elderly and other vulnerable populations, including people with special needs, orphans and war victims, which should include security and asylum to all displaced persons and refugees, as well as protection of their right to voluntary and safe return to their homes and lands.”

Only the Syrian people should decide their country’s future through democratic means, the statement said. Syria should be democratic and non-factional government based on the principle of pluralism and equality.

“Only the Syrian people should decide their country’s future through democratic means, through elections, and should have the exclusive right to determine the political, economic and social system without external pressure or interference, in accordance with international law and obligations of Syria”, – stated in the third paragraph of the statement.

As stated by the Russian President’s special envoy on the Syrian settlement, Alexander Lavrentiev, the Congress of the Syrian national dialogue in Sochi approved three documents – a final Declaration, the appeal of the participants and the list of candidates to the Commission for consideration of issues related to the development of the Constitution of Syria. According to him, the list “will be passed in the near future after a little negotiation the specific names of” special envoy of the UN Secretary General on Syria Staffan de Mistura for further work.