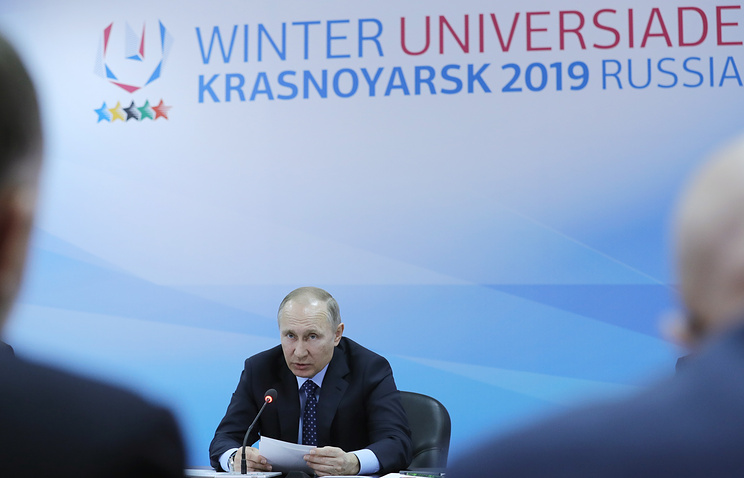 MOSCOW, February 6. /TASS./ Russian President Vladimir Putin on Wednesday in Krasnoyarsk will check the progress of preparation for Universiade 2019. On 8 February, the President will continue to work in Novosibirsk where he will hold a meeting of the Council for science and education.

“February 7, Putin visited Krasnoyarsk, where he will examine the preparation of the city to host the XXIX world winter Universiade 2019. The President will inspect the several objects of sports infrastructure, in particular, multi-functional sports complex “Sopka” and the ice sports and entertainment complex “platinum arena Krasnoyarsk”, and will hold a meeting on issues of preparation for Universiade,” – said the press service of the Kremlin.

According to her, the head of state is also scheduled to meet with a children’s football team of the club “totem” in which the children play from Krasnoyarsk children’s home №1. Since 2011, students of the club have repeatedly won prizes at the world football Championship among children from orphanages and boarding schools held in Warsaw.

XXIX world winter Universiade will be held in Krasnoyarsk from 2nd to 12th of March 2019. Athletes will compete for 76 sets of medals in 11 sports. For the first in the history of Russia winter University games ready 34 sport, transport, medical infrastructure.

A Visit To Akademgorodok

As explained in a press-service, Novosibirsk, the head of state will visit the campus, where they will inspect the laboratory of the Institute of nuclear physics. G. I. Budker and will meet with scientists of the Siberian branch of the Russian Academy of Sciences. In addition, it is expected that Putin will award the President’s prize in science and innovation for young scientists for the year 2017. The award, established in 2008, is awarded to young scientists and engineers for his significant contribution to the development of Russian science, development of new equipment and technologies.

The President also will hold a meeting of the presidential Council of the Russian Federation on science and education, which will discuss the main challenges and prospects of industry development and key directions of the international scientific-technical cooperation.