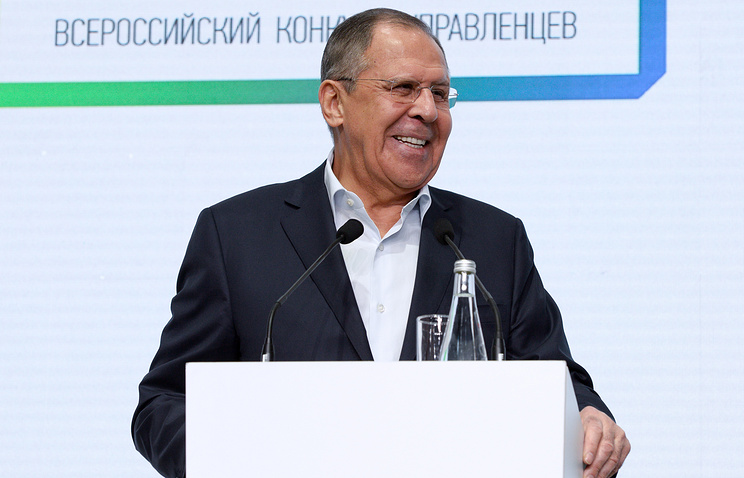 SOCHI, February 7. /TASS./ The Russian foreign Minister Sergei Lavrov on Wednesday held a master class for the finalists of the Russian contest of managers “Leaders of Russia”, during which he told the participants about the trends in world Affairs, the problems in relations between Moscow and Western capitals about the situation with international security. The Minister appeared before the audience without a tie, thus setting the tone for informal and open communication.

Speaking about the situation in Syria, Lavrov emphasized that the United States there is a plan to divide Arab Republic and stressed that the Russian side would speak on this subject with Washington. “Plans the de facto partition of Syria exist, we know that. We have American colleagues to ask how they imagine we do this,” said the Minister. He also noted that the U.S. flirtation with those segments of Syrian society, which is opposed by Damascus, including with arms in hands, “leads to very dangerous results.”

Europe is not always “for”

Turning to European matters, the Minister has noticed that in Europe do not always agree with the policy of the United States against Russia and other controversial issues. “It is a fact, this sounds in the public sphere, – said Lavrov. – Including on the issue of sanctions (against Russia) when the Europeans insist that any steps the United States in this sphere were discussed with them, agreed and did not cause economic damage to European companies”.

The Russian foreign Minister noted that other important issues threaten to escalate into a crisis situation, Europe does not share the approach of their allies, is an example of a nuclear deal with Iran. “Europe is not happy with the requirements of the United States this program to change very significantly, which will cross all the compromises achieved in the course of the approval approach,” Lavrov said. He added that the revision of arrangements or the US withdrawal from the transaction may lead to unpredictable consequences.

The dialog to be

Despite all the friction with the West, Russia however, the Minister said, will continue the dialogue with partners on strategic stability, including under the start Treaty (strategic offensive arms).

“We will continue the dialogue with the USA on strategic stability. Completed its part of the agreement for the destruction of chemical weapons and the US still have a lot to do to fulfill their obligations, – the Minister said. – In full we will fulfill our obligations under the start Treaty, have a dialogue with the United States for the removal of emerging issues in their implementation of this document”.

“I want to fully preserve the Treaty on the elimination of intermediate-range and shorter-range nuclear forces (INF), – said Lavrov. – US attempts to question our conscientious approach to this contract to reject, and to explain and agree on how to keep it in viable condition.”

The Russians can sleep peacefully

In conclusion, Lavrov assured the Russians that their security is reliably guaranteed. “I assure you that the difficulties faced by the country in General, and diplomacy is only a stimulus for more creative and artistic work, stressed the Minister. – Our citizens should be no doubt that in any event, the interests of the country, its security and sovereignty will be secured”.

He also noted that the protection of rights and interests of the Russians is in the center of attention of the Russian government and the Ministry of foreign Affairs. “Of course, we will oppose the flawed and illegitimate practices of some States, which had organized the persecution of the Russian media and squeeze them out of the information space”, – he added.