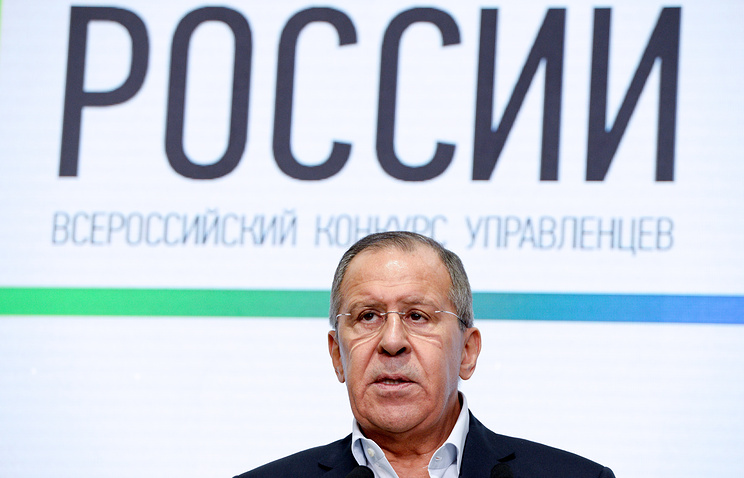 SOCHI, February 7. /TASS./ “Party of war” in Ukraine, consisting of radicals and neo-Nazis, prevents the implementation of the Minsk agreements. This was stated on Wednesday, Russian foreign Minister Sergei Lavrov, speaking during a master class for the finalists of the contest “Leaders of Russia”.

“It is necessary to perform the Minsk package of measures to resolve the crisis in the South-East of Ukraine, and the main obstacle on this way is the “party of war”, which is under pressure from the radicals, including the neo-Nazi group that they feel at ease in Ukraine, is eager to escape from the obligations to engage in direct dialogue with Donetsk and Lugansk, but also does not refuse power solution of the problem,” – said the Minister.

Lavrov in this regard, recalled recently adopted by Parliament but not yet signed by President Petro Poroshenko law on the reintegration of troops and trade and economic blockade of the self-proclaimed Donetsk and Lugansk national republics with Kiev. According to the head of the Russian foreign Ministry, is “a flagrant violation of the Minsk package of measures, which was endorsed by the UN Security Council”.

He also stressed that Russia is urging the US, France and Germany to influence Ukraine to implement the Minsk agreements. “We urge our Western partners, primarily the United States, which have a huge impact on Kiev and the Europeans – France and Germany – as co-sponsors of the Minsk agreements to ensure that they have an impact on Kiev, achieving early practical implementation of its obligations”, – said the Minister.