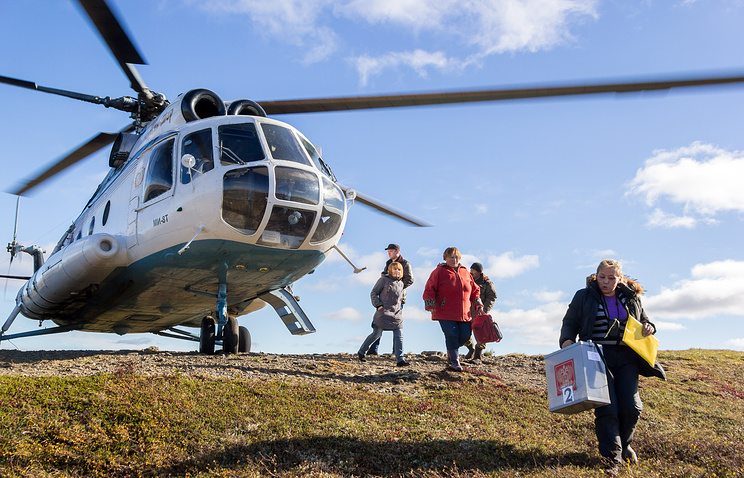 MOSCOW, February 13. /TASS./ The electoral Commission of Yamalo-Nenets Autonomous Okrug (YANAO) signed a contract for about 500 hours of helicopter flights for the tundra-dwellers shift workers and early voting in remote areas of Yamal at the election of the President of Russia. On Tuesday TASS reported in the district electoral Commission.

Early voting starts on February 25. The Russian presidential election will be held on 18 March.

“Early to vote for the indigenous peoples living in remote areas – fishermen, herders and workers of enterprises of fuel and energy complex – shift workers. In total, according to preliminary information, in distant localities is about 35 million voters, including nomads. These voters will fly helicopters, go snowmobiles. We have already contracted approximately 500 flight hours”, – reported in the electoral Commission.

We developed optimal routes to reach the voters with the lowest cost. “Nomads usually vote are positive, rejoice in the arrival of members of the commissions”, – said the electoral Commission.

Part of shift workers will vote on sites specifically created in places of temporary stay of voters. “Such sites for shift workers, we will have 11. For example, in Sabetta (where the end of 2017 was launched the plant “Yamal LNG” – approx. TASS) will be formed three polling stations. For shift workers who do not work in the shift camps and are working points in remote areas, fly helicopters and go ground transport “, – noted in the electoral Commission.

Previously TASS reported that Russia’s Central election Commission will adopt recommendations for regions on the organization of additional public transport routes to the voters was convenient to get to places to vote. According to the electoral Commission of Yamalo-Nenets Autonomous district on the Yamal Peninsula there is no such need, in the Arctic region is not very large cities – a maximum of 115 thousand inhabitants.