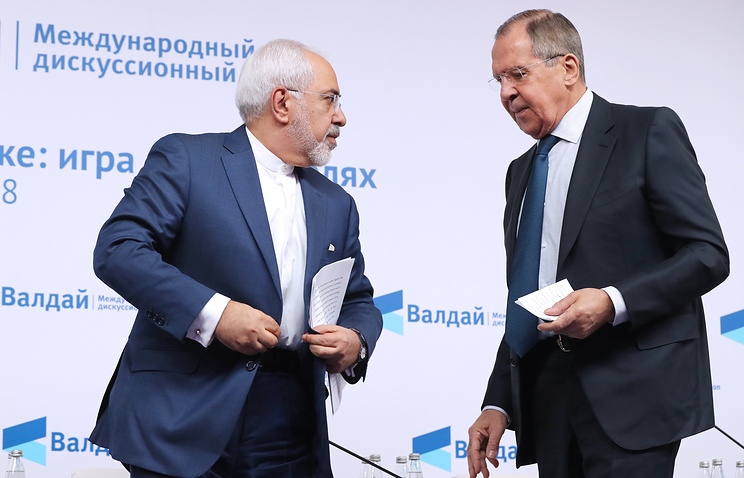 MOSCOW, February 19. /TASS/. The participants of the International discussion club “Valdai” “Russia in the middle East: a game for all fields” for the first day managed to discuss almost all the “weak points” of the region – the Syrian crisis, the situation in Yemen, the Kurdish question, the Palestinian-Israeli settlement, as well as aggravated contradictions between Israel and Iran. The opening ceremony was attended by Minister of foreign Affairs of Russia Sergey Lavrov, and his Iranian counterpart, Javad Zarif, Advisor to Syrian President Busana Shaaban and Deputy, the UN special envoy on Syria, Ramzi Ramzi Ezzeddin.

The fact that the conference is held already for the seventh time and every year attracts more high-ranking guests demonstrates that Russia, thanks to its balanced policy in the region was for most countries a “universal mediator”, said the Chairman of the Board of the Fund of development and support of the club “Valdai” Andrey Bystritsky. “Russia has a reputation as a strong, independent country, it plays an important role as a mediator in the region, both politically and in practical terms, if we talk about the Syrian situation,” he explained in an interview with TASS.

To prevent the partition of Syria

The situation in Syria has predictably caused the most heated discussion, so none of the speakers failed to stay within the allotted time limit. According to the Bystritsky, it was caused by the fact that after the defeat of the “Islamic state” (banned in the Russian terrorist group”), “largely goes ointment – still trying to figure out what the configuration will continue to discuss the future of Syria.”

The number of questions to the Russian foreign Minister, it was clear that most of the audience expected it to get a prescription of the Syrian settlement. “The question is not what Russia will do, and what will not make US,” explained the Russian Minister. In his speech he, in particular, urged US “not to play with fire in Syria and to reconcile their steps,” based on the interests of the people of Syria and the region as a whole.

Like many of the speakers after him, Lavrov expressed concern about U.S. attempts to “divide Syria.” In particular, “such concerns arise when reading those plans that the United States begin to implement on the ground, especially East of the Euphrates, the extensive territories between that river and the borders with Syria, Iraq, Turkey,” the Minister stated.

The need to prevent the disintegration of Syria in the interview with the media said the presidential special representative for the Middle East and Africa, Deputy foreign Minister Mikhail Bogdanov. He recalled that when the three guarantor state (Russia, Iran and Turkey) has launched the Astana process, it was emphasized that the zone of de-escalation in Syria “must be purely temporary in nature”. “Areas in demand from the point of view of the cessation of hostilities, but at the same time we cannot allow the areas of de-escalation has turned into the zone of influence of foreign countries”, – emphasized he.

Quite emotional was the speech of the Minister of foreign Affairs of Iran Mohammad Javad Zarif, who accused the USA that they operate in Syria as an obsession. In his view, the RAA has experienced a new wave of occupation, foreign intervention, especially from the United States. At the same time, warned the Iranian Minister, “there are processes in the region, which will have long term consequences.”

The situation in Afrin

In the process of the conference, it was reported that Kurdish “Forces of national self-defense” will give the Syrian army a few positions in the city of Afrin (65 km from Aleppo) and the border with Turkey, which inevitably shifted the vector of the discussion in the direction of Afrin.

Lavrov linked the actions of the Turkish military by the United States provocative steps. “They were involved in the line, in fact, undermining the territorial integrity of Syria, units of the Kurdish party “Democratic Union”, which led to strained relations with Turkey,” – he stressed.

In turn, Zarif acknowledged that Turkey’s concern is the situation in Syria can be understood, “however, the invasion of the territory of another state will not be able to help solve the problem.”

Advisor to the President of Syria expressed concern that any aggravation of the situation in Syria, NATO would support Turkey. In conversation with reporters, she said that Syrian authorities do not discuss with Turkey its operation in ‘ Afrīn.

Meanwhile, according to the Deputy, the UN special envoy on Syria of Izzeddine Ramsay, the agreement on Afrino can be achieved, it must preserve the territorial integrity of Syria and to protect the security interests of Turkey.

The Kurds were discussed at the conference, not only in relation to the events in ‘ afrīn. As Lavrov said, Russia supports the aspiration of the people to live according to their traditions, but wrong when these aspirations are used in a geopolitical game that has nothing to do with their interests.

According to the Russian Minister, the interests of the Kurds should be protected, in particular, in Iraq – in the framework of a unified Iraqi state. In this regard, he welcomed recent contacts between Baghdad and Erbil (capital of Iraqi Kurdistan). “In the course of these contacts, has managed to normalize relations between the Central government and the Kurdish Autonomous region”, – he said.

In turn, Zarif expressed sympathy for the Kurdish people. “Unfortunately, we are seeing short-sighted attempts by the US to play geopolitacal games that bring harm to the Kurdish population,” he said.

Palestine and Israel: point of no return is approaching

That in Palestinian-Israeli settlement is approaching the point of no return conference participants warned Deputy foreign Minister Mikhail Bogdanov. He stated that “two-state” solution to the Palestinian-Israeli conflict is now “under real threat”. It is both disappointing those present, Russia has no ready-made recipe for Palestinian-Israeli peace process – but also encouraged – Moscow is still ready to do everything possible to arrange a direct dialogue between Palestine and Israel.

Bogdanov could not avoid the topic of moving the us Embassy from tel Aviv to Jerusalem. According to him, it sobered regional players and showed that the American monopoly in the middle East is not working. “The only possible international support for the negotiations – said a senior diplomat. – They must be two-way. In this context, the proposal of the Russian leadership about the conduct of the meetings of the heads of Palestine and Israel seems the most relevant.”

In turn, the Deputy Secretary-General of the Arab League Husam Zaki urged Washington to clearly voice its position on the Palestinian-Israeli settlement and warned that otherwise the situation will get worse. “If the American position would be acceptable for the resumption of negotiations, the Arab States will do everything possible to convince Palestinian side to negotiate, if there is at least some basis [for dialogue],” he said.

“If the U.S. position would be unacceptable to continue the negotiations, nobody will be able to predict anything,” stated Zaki. “But if America will not speak out, there will be indirect latent conflict between Israelis and Palestinians that will negatively affect the whole situation in the middle East”, – concluded the Deputy Secretary General of the Arab League.

To move forward as climbers

But the most important aspect of the conference, which highlighted Bystritsky, was the fact that it provides a unique platform for open discussions and meetings on the sidelines of prominent political and public figures from different countries of the region and external players.

Session of the first day of the conference was “interesting and intense”, said the expert. Summarizing what was said by the participants of the forum, he stressed the need to solve the most complex problems, “carefully observe the agreements already achieved”. “As the climbers who climb the rock, it is necessary to hammer the pegs, and climb on, as hard as it was. No romping no simple solutions”, – said the interlocutor of the TASS.

About the same in Palestine and Israel, said Mikhail Bogdanov: “Often, when there are any problems, inventing something new, but not running”. “We need to implement existing agreements”, – he concluded the first day of the conference.