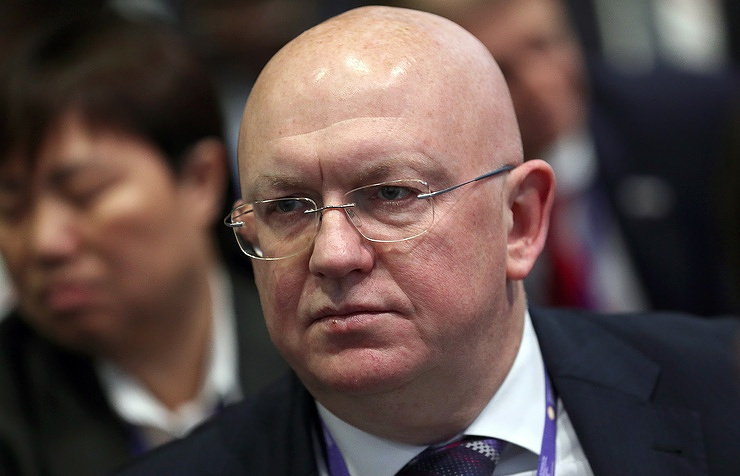 UN 21 Feb. /TASS/. Permanent representative to the UN, Vasily Nebenzia Wednesday sharply said American colleague, Nikki Haley, who called the state system in Russia “Putin regime” and criticized Moscow for its policy towards Ukraine. The delegations of the two countries exchanged remarks at a meeting of the UN Security Council devoted to the maintenance of international peace by implementing the principles of the UN Charter.

In her speech, Haley argued that dictators violate human rights and incite violence and provoke regional conflicts under the guise of the principle of sovereignty. She cited the example of the behavior of the authorities of the Iran, North Korea and Syria, and elaborated on Moscow’s policy.

“In Ukraine, Russia remains the occupying power in the Crimea and destabilizing force in Eastern Ukraine. Let me repeat, the sovereign right of countries are of fundamental importance, but when we do not defend the principle of sovereignty, allowing the regimes of the Kim [Jong UN], [Bashar al -] Assad and [Vladimir] Putin to act with impunity, there is the opposite. When the Security Council is to hold accountable countries that violate the UN Charter, we protect the sovereignty. So it was in 1990, when Saddam Hussein invaded Kuwait,” said US Ambassador.

“I want to remind the permanent representative Hailey: in Russia, not the regime, and the legally elected President and appointed by the government, – said Vasily sebenza. – I would ask in the future American delegation to observe even elementary diplomatic propriety. By the way, in Syria, too, legitimate government, whether you like it or not.”

The rise of the new world order

According to Nebenzu, some States “it is difficult to accept the obvious thing.” “The era of the cold war, and the post-bipolar phase ended. The world is in the process of establishing a new, more just and democratic polycentric world order. Its essence is in the appearance and strengthening of new centres of economic power and political influence”, – said the permanent representative of the Russian Federation.

He called the theme of the meeting highly relevant to the current state of international relations, noting that the principles of independence and equality of States and noninterference in their internal Affairs and peaceful settlement of disputes “represent the core of the neighbourhood” countries and mutually beneficial cooperation between them “for the greater good”.

“Unfortunately, throughout the history of the UN the world has witnessed many examples of blatant disregard for the UN Charter down to the illegal use of force, overt interference in the Affairs of States, the destruction outside of the traditional public foundations, violent regime change and the imposition of alien cultural and social norms”, – stated the Ambassador of the Russian Federation. He cited the example of the bombing of Yugoslavia and Libya, carried out in violation of international law and Security Council resolutions, as well as “the occupation of Iraq under false pretenses”.

Anniversary of the agreement on the settlement in Ukraine

In addition, the diplomat reminded that February 21 marks four years from the date of signing of the agreement on a political settlement in Ukraine, which on the next day violated seized power in Kiev, the opposition “with the tacit acquiescence of guarantors”. “The open incitement from the outside led to the unconstitutional change of power in Ukraine, the uncontrolled spread of the country’s nationalism and neo-Nazism, the internal armed conflict and numerous victims in the South-East of the country. I want to ask, why have we not heard then in 2014 – so popular today among a number of delegations statements about the need to prevent conflicts?”, – asked the sebenza.

He reaffirmed the commitment of Russia to the speedy settlement of the conflict in Ukraine, warning that, “while Kiev is sabotaging the Minsk process and the “sells” to the world the legend about the events in the country” to “positive developments little hope.”

As stated by the permanent representative of the Russian Federation, in our days the world has witnessed “a new, unprecedented on such a scale in the history of the phenomenon sweeping accusations of the countries of meddling in the internal Affairs and processes”. “This is a very convenient excuse to justify any of its actions, not bothering to produce evidence, and at the same time to get the world to forget partially about their continued interference in the internal Affairs of sovereign States”, – said Vasily Nebenzia.

The Wednesday meeting was held at the initiative of the presiding in the UN security Council in February, Kuwait celebrates this month the 27 th anniversary of the end of the invasion of Saddam Hussein’s regime. The Iraqi aggression was stopped after the operation under the authority of the United States authorized by the UN Security Council.

In the meeting of the security Council was attended by several foreign Ministers, including Poland’s Jacek Czaputowicz. He said that the world is still “serious violation of international law,” which ranked as “the illegal annexation of Crimea and support of separatist forces in Eastern Ukraine” by Russia.

Condemning the “illegal annexation of Crimea” was also made by the permanent representative of Sweden to the UN, Olof Skoog, while zampolpreda of great Britain Jonathan Allen elaborated on destabilizing, according London, Moscow’s policy.

“We cannot ignore Russia’s attempts to rewrite the borders in Europe. This month marks the fourth anniversary of the illegal annexation of the Crimea, carried out in gross violation of article 2 of the Charter. We are deeply concerned about the deteriorating situation of human rights in Eastern Ukraine and call on Russia to uphold the commitments undertaken at the signing of the Minsk agreements”, – said the diplomat.