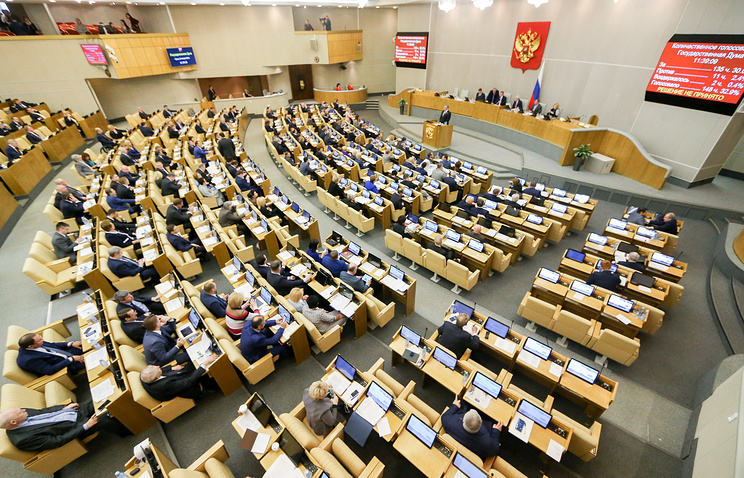 MOSCOW, February 23. /TASS/. All four factions of the state Duma adopted on Friday a statement in which it urged the international community to condemn the Ukrainian law on the reintegration of Donbass, as putting an end to the peace process and the implementation of the Minsk agreements. This was reported on the official website of the lower house chamber.

“Deputies of the State Duma, consistently advocating a peaceful settlement of the conflict based on the Minsk agreements, urge the Ukrainian authorities to think about their responsibility and abandon new plans the massacre of its own citizens”, – reads the statement of the fractions. There’s also drew attention “of the United Nations, the Organization for security and cooperation in Europe, parliamentary Assembly of the Council of Europe, the United States Congress, the European Parliament and the parliaments of individual European States, including the States – guarantors of the Minsk agreements, on the necessity of condemning the repressive acts of the authorities of Ukraine”.

“No considerations of “containment of Russia”, so popular in recent years in the West, can’t justify condoning the resumption of large-scale civil war and the continued repression in Ukraine” – according to Russian parliamentarians. They also indicate that the aggravation of the situation are interrelated with the actual failure of the Ukrainian authorities to investigate and punish those responsible for the killings on the Maidan, the Commission of a coup and subsequent crimes, such as atrocities, may 2, 2014 in the city of Odessa”.

The text of the statement at the same time it is noted that the law on the reintegration of Donbass are directly aimed against Russia and Russian compatriots in Ukraine. “Deputies of the State Duma indignantly say that hate the law of Ukraine “On peculiarities of state policy on ensuring state sovereignty of Ukraine on the temporarily occupied territories in the Donetsk and Lugansk regions” leads to war, and not peace. It is directly aimed against the Russian Federation and Russian compatriots in Ukraine and evidence the desire to depopulate the earth, which is home to several million people, give new impetus to the witch-hunt in Ukraine. This can not happen”, – the document says.

Parliamentarians indicate that the Verkhovna Rada during the discussion and adoption of the law “left no doubt that his goals are the failure of the internationally recognized Minsk agreements on the settlement of the conflict in the South-East of Ukraine and the rejection made under these agreements by the Ukrainian side of the obligations.”

“The document is not even a mention of the Minsk agreements. The law excludes the possibility of negotiations of the Ukrainian authorities and representatives of Donbass, speaking, as you know, against the coup in Ukraine in 2014, and does not provide any special status for the territories, where the population rose up against the revolution, no comprehensive Amnesty for participants of hostilities”, – stated in the statement of the state Duma.

On the website of the state Duma it is reported that the faction of the liberal democratic party, after endorsing the statement “expresses a dissenting opinion”, calling to amend its regulations “on the question of the necessity of termination of the Agreement on friendship, cooperation and partnership between Russia and Ukraine”