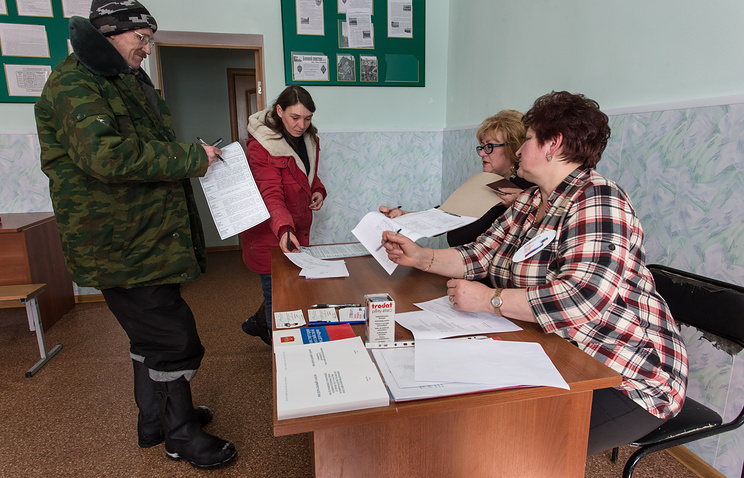 TASS, February 27. Early voting in the elections of the President of Russia began on Tuesday in remote regions of Sakhalin and Magadan areas.

“Today we have the first flight: Cape Kril went the helicopter, there will be able to vote lighthouse Keeper. Tomorrow we plan to fly to Moneron. There especially protected natural territory. Your vote in the election of the President will be able to pay its workers and military personnel,” – said TASS Deputy Chairman of the electoral Commission of the Sakhalin region Paul Sivalnev.

He said that the period of early voting began on 25 February. “But all sorties are planned individually based on weather conditions, arrangements with the airline”, – said the Deputy Chairman of the regional electoral Commission.

In full swing, early voting is already underway in Kamchatka, Chukotka, Yakutia and Amur region. In remote areas, the first voice of the breeders and the keepers of the lighthouses.

To the voters – helicopters and snowmobiles

The members of the election commissions of the Far East in remote areas reached by helicopters, off-road vehicles and even snowmobiles.

So, in the Chukotka region 29 of the 55 polling stations located in remote areas. “Get there not only by air but also on snowmobiles, ATV, Ural trucks and other equipment,” – said TASS Deputy Chairman of the electoral Commission of Chukotka Autonomous Okrug Arseny Pacudan.

Chairman of the electoral Commission of the Amur region Nikolay Nevedomsky said that often in the settlements, shift camps, weather stations, remote military units there is no communication at all, some established radio contact, and reach the destination in a normal car impossible. For example, in the Tynda district of the organizers of the election, during early voting almost every day will be in the way, will have to try all kinds of transport: helicopter, UAZ and “Ural”, and crawler tractor.

“In the Magadan region, only for air travel of members of the territorial election commissions (TEC) has allocated over 9 million rubles. Such a big amount is necessary because the flight is long – need to get to the beacons, gidrometeostantsiya… For this purpose we spend a lot of money, even if there are three or four of the voter”, – said the Chairman of the electoral Committee of the Magadan area Nikolay Zhukov.

In Yakutia for organization of early voting, which started on Monday, and for delivery of ballots to remote areas signed contracts with three airlines “Polar airlines”, “Delta” and “ALROSA”. For these purposes from the Federal budget allocated more than 53 million rubles, told TASS Deputy Chairman of the CEC Yakutia Ivan Androsov.

Elections for students and shift workers

Tens of thousands of applications for voting at the place of residence registered in the election commissions. For the Far East, where a number of companies are working in shifts, opportunity to vote on the location of particularly important. So, in the Magadan region to date, excluding the data portal of public services, received more than 1,300 applications for voting at the place of stay. The majority of applicants shift workers coming to work in Magadan oblast from other regions of the country.

On Sakhalin among those wishing to vote at the place of residence of the students of secondary special and higher educational institutions, employees of offshore projects working in shifts. Only on Sakhalin and the Kuril Islands filed almost five thousand such statements.

The leaders in applying – Primorsky and Khabarovsk Krai. According to the election commissions in these regions, there already served more than 17 thousand applications.

In the far East have already begun the work of foreign observers. First began working representatives of the international observation mission of the Organization for security and cooperation in Europe (OSCE) Denis Appel (Austria) and Joseph Worall (UK). They are watching the preparation for the elections in Primorsky Krai.

“International observers will stay in Primorye until 5 March 2018, working with election commissions and authorities”, – noted in regional electoral Committee. They have already visited all of the territorial election Commission, which is located in Vladivostok and met with their presidents.