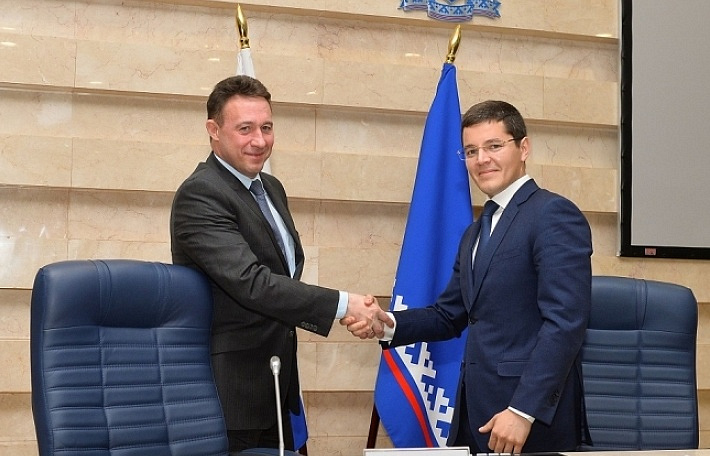 MOSCOW, may 31. /TASS/. Plenipotentiary representative of RF President in the Urals Federal district (UFD), Igor Kholmanskikh on Thursday presented in Salekhard, the acting Governor of the Yamalo-Nenets Autonomous Okrug (YANAO) Dmitri Artyukhova, told TASS in the press service of the Governor YANAO.

Earlier, on may 29, Russian President Vladimir Putin has appointed Deputy Governor of the YANAO Artyukhova, acting head of the region. Dmitry Kobylkin, who was the head of Yamal-Nenets Autonomous district since 2010, became head of the Ministry of natural resources.

Dmitry Artyukhov noted that his goal is to “keep the same high pace that was set by Dmitri Kobylkin” and to consolidate the leadership in the Russian Arctic. “Yamal is my home… area has created a very good team to stop us is impossible, it is necessary to complete the project, the start of which has already been given, among them the Northern latitudinal railway, which is waiting for the whole country. The priorities of Yamal unchanged – implementation of presidential decrees, the solution of the tasks set by the head of state in the address”, – the press service quoted acting head of the region.

Earlier on Thursday, Igor Kholmanskikh and Dmitry Artyukhov has held the first working meeting, which discussed the issues of socio-economic development of Yamal. In particular, they discussed the decision of problems on children’s day nursery, housing and road construction.

Artyukhov will be acting head of the region before joining the office of a person elected the Governor. The election of Governor members of the Legislative Assembly YANAO needs on 9 September. In case of a victory on elections Artyukhov will become the youngest Governor in the country.