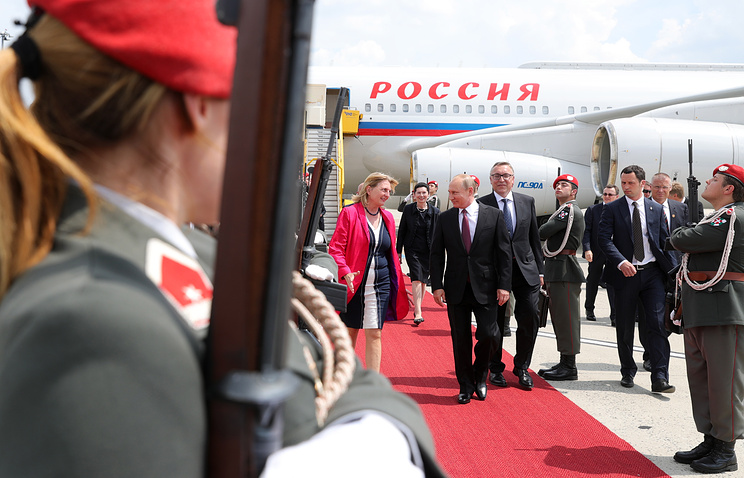 VIENNA, 5 June. /TASS/. Russian President Vladimir Putin on Tuesday arrived on a working visit to Vienna, dedicated to the 50th anniversary of the exports of domestic gas to Austria. This is the first foreign visit of Putin after his inauguration on may 7 in the position in the current presidential term.

As reported a press-service of the Kremlin, during the visit of the Russian leader planned “to discuss the state and prospects of Russian-Austrian relations in various fields and to exchange views on key issues on the international agenda.”

From the airport the Russian leader came to the Hofburg Palace where the official ceremony of his meeting with Austrian President Alexander van der Bellena. In the courtyard of the residence of the military band of the special guards of the President of Austria performed the national anthem of the Russian Federation. After photographing the joint Putin and van der Bellen removed to the talks in narrow format. Then the communication of the heads of state will continue in an expanded format – in the format of a working Breakfast, after which the presidents will give a press conference.

The next item in the schedule of visit to Vienna, Putin includes talks with Federal Chancellor of Austria Sebastian Kurtz, also being held at the Hofburg Palace in the narrow and expanded formats. As expected, the leaders will make statements to the media and will take part in the ceremony of signing bilateral documents.

The Hofburg Palace is one of the most significant monuments of Vienna. In the former residence of the Imperial family of the Habsburgs are present, the office of the President, government agencies, and museums.

Later, on 5 may, Putin and Kurtz go into the building of the Austrian Federal economic Chamber, where he will meet with the participants of the business forum, organized by Russian-Austrian business Council. In addition, during the visit, Putin will traditionally lay a wreath at the monument in honor of Soviet soldiers who died liberating Vienna, in Schwarzenbergplatz. In the evening the Russian President will visit the Viennese Museum of art history, where together with the Austrian leaders will open the exhibition “Paintings by old masters in the Hermitage”.

This is the first foreign visit of Putin after his inauguration on may 7 in the position in the current presidential term. As reported a press-service of the Kremlin, in Vienna it is planned “to discuss the state and prospects of Russian-Austrian relations in various fields and to exchange views on key issues on the international agenda.” The visit is timed to the 50th anniversary of the beginning of supplies of Russian gas to Austria.

Earlier Putin visited Austria as President four times – on a working visit in 2001, in 2004 to participate in the funeral of President Thomas Klestil, and official visits in 2007 and 2014. With the current Federal Chancellor, the President of the Russian Federation held talks during the visit of Sebastian Kurz to Moscow on 28 February of the current year. Meeting with current Federal President of Austria, occupying the post from January 2017, Putin will be the first, however, the Russian leader met with Alexander van der Bellekom during his visit to Vienna in 2001, when he was Chairman of the Green party.