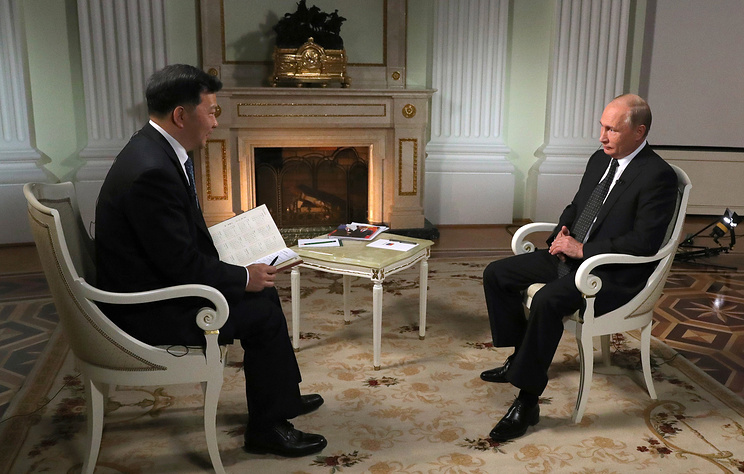 The President of Russia Vladimir Putin on 8 June will visit Beijing on a state visit, and then will participate in the summit of the Shanghai cooperation organization (SCO) in Qingdao, which will be held June 9-10. In anticipation of the trip, the President talked with the Chairman of Corporation of China Shen Hasuna. TASS has selected key quotes from Putin in this interview.

About relations with China

China and Russia are neighbors. We communicate with each other for centuries, have very deep historical ties and roots. And it’s no coincidence that we, as neighbors, have built in recent decades, a relationship that probably today do not even have example in the world. This is a relationship that is really built on the interests of each other.

On the “Russian dream”

The desire to improve people’s lives. This goal can be achieved in many different ways and with different tools, but one goal, and in Russia there can be no other purpose than improving the lives of our citizens.

The presence of some restrictions and sanctions we are not surprised, we are not afraid and will never force us to abandon the independent, sovereign development.

I assume that Russia will either be sovereign or non-existent. And of course, the Russian people will always choose the former. I think, like Chinese people. No other way we have. But we understand that our partners here these restrictions and sanctions focus on one thing — to restrain the development.

We made it very simple. I will not hide (I don’t know, he wouldn’t be angry), drank a glass of vodka, just cut some sausage. We just after the end of the day He did a very accessible and humanly sincere person. But at the same time a very reliable partner.

Yes, would love to try. And I love seafood, and beer, trying really hard not to eat, but want to try and do.

I graduated from St. Petersburg state University, faculty of law, therefore, in principle, could work the lawyer, but all her life she worked in security, in foreign intelligence for the Soviet Union. Then worked in the Executive branch in St. Petersburg — I think, in the municipality. Each of these activities I liked, he was like. I think a lawyer could work.

Every day I spend on the sport about two, two and a half hours, and I do in the gym, swim, sometimes go on the tatami if I have sparring partners, and not as often as would like but play hockey. Play is too strong a word, but trying to play hockey.

About the national team of Russia on football

Unfortunately, our team recently great results not shown. But we hope all the fans and all the football lovers of Russia hope that the team will play adequately, will show a modern, interesting, beautiful football and will fight until the end.

I have players who I think are outstanding and that can certainly lay claim to that title, to that title. Among the Russian, Soviet players Lev Yashin, among foreign — Pele. Well, Maradona I still really like.

About the surprise for XI Jinping

We exchanged some details. But what would that be a surprise if I say that will bring him the gift. Let it be until a secret which will remain between me and you, I then you whisper in my ear.