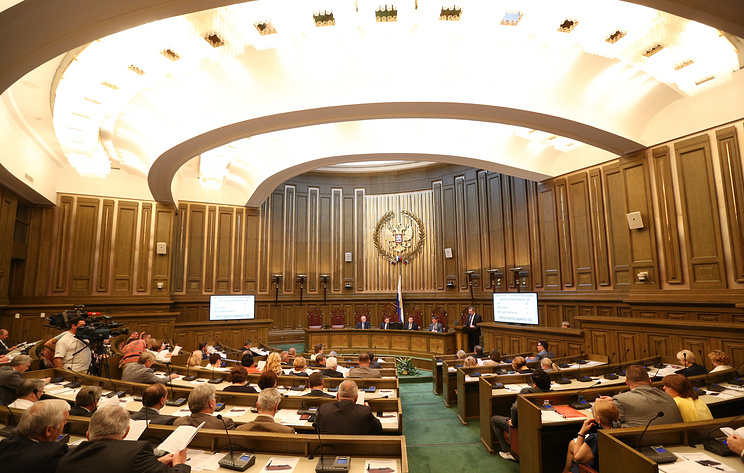 MOSCOW, June 26. /TASS/. The Plenum of the Supreme court of Russia adopted the resolution with the explanation the judges of the application of the legislation on public events (meetings, rallies, processions, demonstrations and pickets). It clarified the issues of dispute resolution on the harmonization of the public shares, administrative and criminal responsibility for the obstruction of the public shares, and for violations of their organizers and participants.

This is the first resolution of the Plenum of the armed forces on issues of the public shares. The law “On meetings, rallies, demonstrations, marches and pickets” was adopted in 2004.

In particular, the Supreme court ordered courts in each case of dispute, by consent of public events to explore all the arguments of the authorities.

“When hearing administrative cases on contesting decisions, actions (inaction) related to the mediation process, courts should presume that the interference of public authority in the right of holding peaceful public events should be based on law, be necessary and proportionate to pursue this on a lawful purpose,” reads the resolution.

“With this in mind, the court in each case should explore all nominated public authority’s arguments and the evidence before them and to assess them for the presence of relevant and sufficient grounds for the implemented intervention,” explained Plenum of the armed forces.

The Supreme court reminded that authorities have the right to refuse approval of a public event only in two cases – if the person who submitted the notification is not entitled to be organizer of a public event, or selected a place where the public event is prohibited.

The postponement of the event

The proposal of change of venue or time of the public event “can not be arbitrary, unmotivated, and should contain specific evidence about the apparent impossibility of this event in the stated place and (or) in the stated time.”

Just the inconvenience caused by public event for other citizens, and the assumption of the possibility of such inconvenience “themselves may not be a valid reason to change the place and (or) time of holding a public event”. For example, if we are talking only about the temporary rerouting of traffic or interference to pedestrians, if it does not affect traffic safety. For valid reasons, explained in the Plenum can be considered to be maintaining of uninterrupted operation of vitally important objects of infrastructure and communications (e.g., emergency service networks), public order and security of citizens (including threat of collapse buildings, crush), interference with citizens ‘ access to housing, the threat of an accident, even if additional measures are unable to eliminate it.

The authority is required to provide the court with evidence of the specific circumstances, the court may not accept a reasonable proposal to move “with reference to other circumstances not specified in (sent to the organizers – approx. TASS) sentence”.

The plenary noted that if “within three days from the date of receipt of the notification about the public event the public authority” is not brought to the organizer of any reasonable proposals for the relocation or bringing the forms or objectives of the action in accordance with the requirements of the law, “a public event can be regarded as coherent”. The exception is when the organizer refuses the receipt of the proposal.

The Plenum of the Supreme court of Russia also acknowledged the fact that the holding of public events (meetings, rallies, marches, etc. for the expression of citizens ‘ opinions) has priority over fairs and other cultural events.

“Courts should take into account that the specially allotted places for holding of public events is determined by Executive authorities of the RF subject with the aim of creating additional conditions for the unimpeded realization of citizens and their associations the right to freedom of peaceful Assembly,” said the plenary.

With this in mind, “holding cultural events, fairs and other activities not related within the meaning of the law on public events (rallies, demonstrations, marches) to a public event, in itself, cannot be a legal basis for the proposal to change the place and (or) time of holding the public event announced to be held in a designated place.”

However, said Plenum, fairs or other cultural events can be regarded as the legal basis for the proposal to postpone the action “only if the information of the meeting was published in accordance with the requirements of the legislation of the Russian Federation to the filing of the notice on holding the public event and the joint holding of these events could not be assured of their safety.”

The principle of priority applies in the case of the two public events in one place, if they are simultaneous cannot guarantee their safety (including taking into account the overcrowding of the venue). The organizer of one of the public events may be asked to move the location or time if its holding simultaneously with another public event, notification of which was sent earlier, “regardless of the number of persons jointly present in the declared public events, will not ensure their peaceful nature the forces of law and order and will require extraordinary measures”.