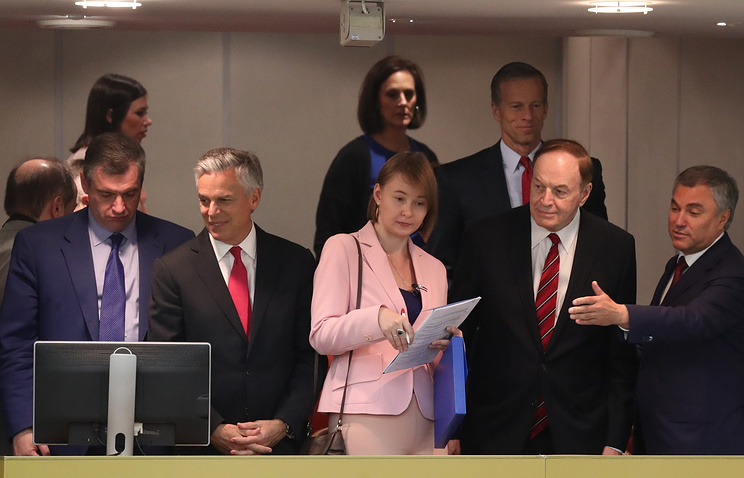 MOSCOW, July 3. /TASS/. The state Duma is open to dialogue with U.S. lawmakers, but now inter-parliamentary relations of Russia and the United States equal to zero. This was stated on Tuesday, the Chairman of the state Duma Vyacheslav Volodin at a meeting with delegation of the Congress of the United States.

He noticed that this is the first in many years, the U.S. Congress delegation visiting the state Duma. “So we have something to talk about, given that our relations in the framework of the parliamentary dimension almost equal to zero”, – stated Volodin, expressed hope that the meeting “will mark the beginning of this relationship.”

“We believe that you are the ones who initiated this meeting,” continued the speaker. “In this connection I would like to emphasize your role, and I think it would be correct to underline the role of Mr. [John] Huntsman, U.S. Ambassador to Russia, he said. – As far as I know, he owns the initiative including [conduct] of the inter-parliamentary dialogue.”

Volodin expressed hope that today’s conversation “will lay the Foundation for such meetings continued and was substantial”.

In turn, the participant of the meeting, the Chairman of the Duma Committee on education Vyacheslav Nikonov noted that inter-parliamentary dialogue between Russia and the United States thawed. “The ice was broken. Inter-parliamentary contacts between Russia and the United States thawed”, – he wrote on his page in Facebook. “The chairmen of the Senate committees Richard Shelby (al), Ron Johnson (Wi), John Thune (South Dakota), John Hoven (nd), senators Kay Granger (TX), John Kennedy (La), Jerry Moran (Kansas), Stephen Danz (MT). That’s such a weak company from the ruling Republican party arrived for a meeting in the State Duma”, – noted the politician.