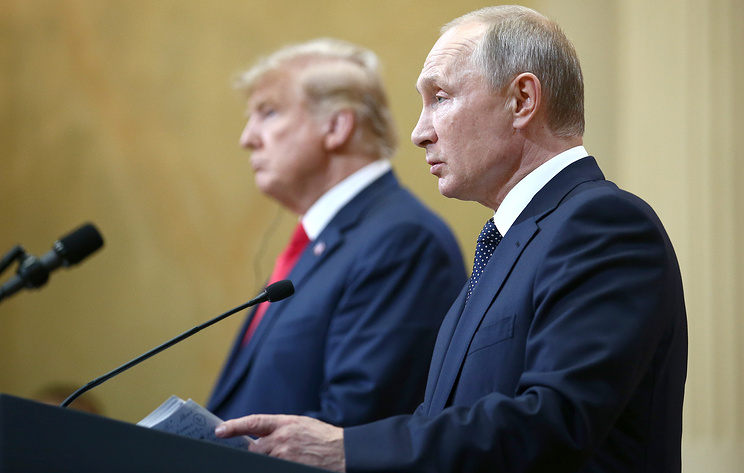 WASHINGTON, 8 Aug. /TASS/. Russian President Vladimir Putin presented his American counterpart Donald Trump at the meeting in Helsinki a number of specific initiatives in the field of disarmament and arms control, including providing for waiver of the placement of weapons in outer space. On Tuesday the newspaper reported Politico, citing her trapped in a Russian document describing the proposals submitted by Putin Trump at the summit in the Finnish capital on July 16.

The paper argues that in her possession was a Memorandum entitled “Dialogue on issues of arms control,” prepared in Russian and its English translation.

According to the data presented Politico, Moscow’s proposals provide for the extension of 5 years by the Russian-American Treaty on measures for the further reduction and limitation of strategic offensive arms. The text of the Memorandum also States that these proposals include the need “to reaffirm the commitments” assumed by the two parties in the framework of the INF Treaty.

The Memorandum also addresses the growing tension in Eastern Europe and offers Moscow and Washington “to take action to prevent accidents when carrying out military activities in Europe and improved confidence and transparency in the military sphere”, says the publication.

As Politico writes, the document says that the two sides should “begin consultations at the expert level” to determine the list of destabilizing arms so that they were covered by “control over armaments”.

The resumption of dialogue

The Memorandum alleged offers to hold consultations on “strategic stability” under the leadership of under Secretary and Deputy Minister of foreign Affairs of the Russian Federation, which could start to discuss several pressing issues, particularly the situation in Syria. It is also recommended to start a dialogue in the format of “two plus two” with participation of heads of the foreign and defense ministries of the two countries, according to Politico.

The publication also recalls that the Deputy head of the Pentagon John Rood in July announced the beginning of the negotiation process “time and place of the negotiations on strategic stability”, which, in particular, will discuss nuclear doctrine.

In mid-July in Helsinki was the first full meeting of Putin and trump. The leaders talked one on one for a little over two hours, then they were joined by members of delegations. The presidents discussed issues of bilateral and international relations, and by the end both leaders noted that made a big step forward.