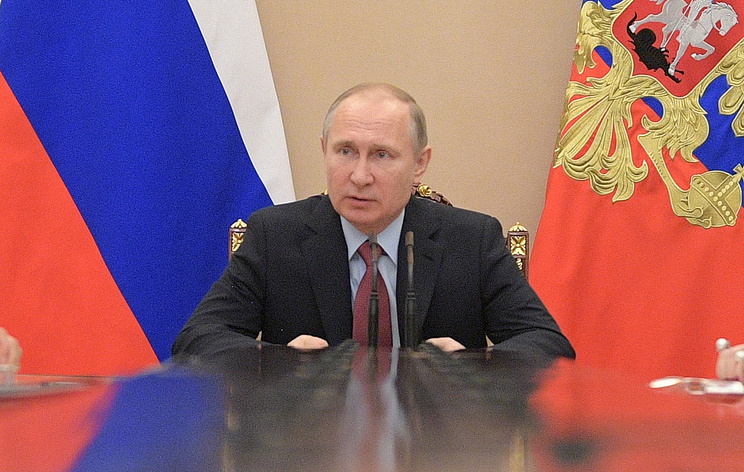 MOSCOW, August 10. /TASS/. Russian President Vladimir Putin discussed with the permanent members of the security Council of Russia about possible new sanctions on Russia from the United States. This was reported by press Secretary of the head of state, Dmitry Peskov.

“The officials also discussed possible new unfriendly steps by Washington in the form of trade restrictions,” – added the spokesman. “Highlighted the complete illegitimacy of such actions from the point of view of international law”, – said Peskov.

The meeting “discussed current issues of socio-economic development of the country.”

In addition, the President discussed with the members of the security Council the issues of preparation for the upcoming 12 August in Aktau (Kazakhstan) summit of the “Caspian five” (Russia, Kazakhstan, Azerbaijan, Turkmenistan, Iran).

“The parties noted the importance of finalization of years of work on the settlement of the legal status of the Caspian sea”, – said Peskov.

As previously reported by the press service of the Kremlin, the leaders of the “Caspian five” at the meeting in Aktau will sign the Convention on the legal status of the Caspian sea, which was conducted in 1996.

It is expected that part V of the Caspian summit, the presidents will consider the key aspects of cooperation in the Caspian region in various fields, will discuss the implementation of decisions taken at previous meetings of the heads of States of the “Caspian five”. In addition, the meeting will be signed a number of five-sided intergovernmental documents.

In the meeting with the President of the Russian Federation was attended by the speaker of the state Duma Vyacheslav Volodin, the head of the Kremlin administration Anton Vaino, security Council Secretary Nikolai Patrushev, defense Minister Sergei Shoigu, FSB Director Alexander Bortnikov.

On Wednesday it became known that the U.S. administration from August 22 plans to impose sanctions against Russia because of the attributed to her involvement in the poisoning March 4, ex – GRU Colonel Sergei Skripal and his daughter Julia in Salisbury. As noted earlier, state Department spokesman, after 90 days, us authorities will make a decision about the introduction of a second package of sanctions against Moscow, depending on whether it is a number put to her conditions. Russia has repeatedly denied allegations of his involvement in the incident with Kripalani.