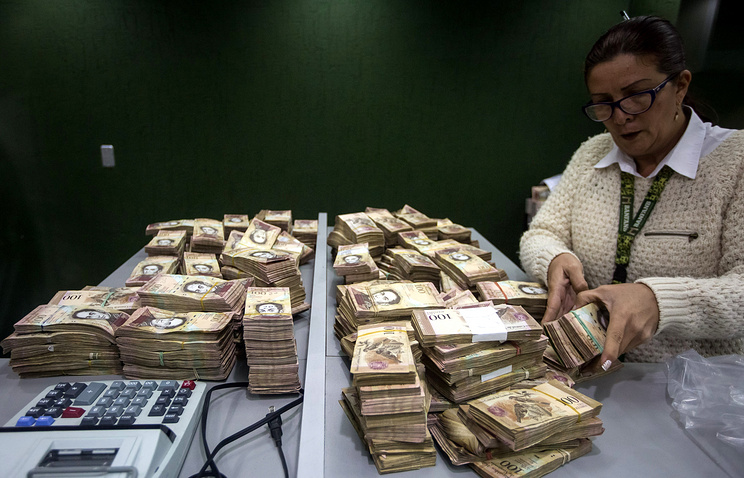 TASS, August 20. Denomination of the national currency begins in Venezuela on Monday. The authorities of the country, where inflation, according to IMF estimates, by the end of the year may reach one million per cent, intend thus to protect the economy from “financial attacks of the imperialists”. The new currency will be called the sovereign Bolivar, the largest banknote will be 500 bolívares (50 million before the reform) is less than $10 at the black market rate.

About the upcoming denomination Venezuelan President Nicolas Maduro announced in the second half of March 2018. “I decided to remove three zeros [c banknotes] and withdraw from circulation banknotes available”, – said the head of state. It was expected that the new notes will appear in the population at the beginning of June, but the reform had to be postponed.

In late July authorities again moved the denomination, from the beginning to the second half of August, pointing out that the bills will be removed five zeros and the new currency will be tied to the Venezuelan bitcoin Peter. It went on sale in February, the cost of one unit equal to the price of a barrel of recovered oil and is about $60.

Before you start implementing reforms, Maduro announced an increase of 60 times the minimum wage – up to 1,800 sovereign bolivars (180 million at the old rate) and bind it to the Petro. “The program of economic recovery designed to replace criminal the dollar and be done with it and the criminal pricing, as well as to restore the purchasing power of all Venezuelans”, – wrote President in his Twitter. He added that this will “cure the wounds of the economic war” which, in his opinion, waged against Venezuela.

The denomination will inevitably lead to multiple – thousands of times – increase in the price of gasoline in Venezuela, which had hitherto been the cheapest in the world. Maduro announced that the cost of gasoline will be brought to the international level, but for the citizens, who received a special ID card will apply for state subsidies for the purchase of fuel. According to the head of the state, the creation of a “system of direct subsidies” should not take more than two years. The President also announced the decision to raise the value added tax (VAT) from 12% to 16%.

As told by 18 August, the Minister of communication and information Jorge Rodriguez, VAT will not be levied on food and medicine, as well as products for agriculture. In addition, he said that the system of subsidizing the price of gasoline will start to operate already from the end of September.

Another innovation, according to the Minister, will be the emergence throughout the country not less than 300 currency exchange that individuals can freely perform operations of this kind after their recent legalization. The exchange rate will be set by the Central Bank of the country. When the exchange will begin is still unknown.

The opinion of the opposition

The change of the nominal value of banknotes will not solve the problems of the Venezuelan economy, said a member of the Finance Committee of the National Assembly Jose Guerra. The unicameral Venezuelan Parliament is under the control of political opponents of the Executive. “The denomination will not help to reduce inflation, is nothing more than the decision to remove the zeros [c banknotes], we already passed it in 2007-2008, when they took three zeros. A total of three zeroes before and five zeros now that we have cleaned and we have hyperinflation” – quoted performance policy portal El Impulso.

According to Guerra, the authorities will entail a rise in prices of not only gasoline, but also of services of housing and communal services, including electricity and telephone. In the end, the Deputy believes, will end the massive devaluation of the national currency because of the issue of unsecured money supply, and this again will reduce the purchasing power of working people.

The situation in the country

In recent years, Venezuela is going through an acute socio-economic crisis marked by soaring prices and the devaluation of the Bolivar. According to the latest estimates of the parliamentary Committee on Finance, in July, the annual inflation amounted to nearly 83000%. Official data on prices in the country are not published for several years.

Incomes have not kept pace with inflation, despite the fact that the government several times a year to raise the minimum wage. According to the Center for documentation and social analysis of workers in July, the cost of a set of products for a month for a family of five people topped 295 million bolivars. The minimum guaranteed income earners at the end of June by the decision of the government was increased to 5.2 million bolivars.

The representative of the UN Secretary General Stefan Dyuzharrik this week noted that in Venezuela there is a shortage of food and medicine. According to him, the shortage of medicines has resulted in “severe deterioration in health facilities and the spread of diseases such as HIV, malaria and tuberculosis”.

Difficult situation in Venezuela has become one of the main reasons for mass emigration. According to the latest UN data, from the Bolivarian Republic has left some 2.3 million people, mostly in Colombia, Ecuador, Peru and Brazil.

Due to the influx of migrants, the authorities of Ecuador and Peru this month tightened rules for crossing borders: now to enter the Venezuelans will need to show a passport, not a national identity card as before. It is estimated that since the beginning of this year in Ecuador was attended by more than 540 thousand Venezuelans to Colombia – more than a million from the beginning of 2017.

In Brazil, the increase in the number of immigrants from Venezuela have led to the conflict. On Saturday, August 18, a group of residents of the city of Pacaraima in the Northern state of Roraima defeated camp, inhabited by migrants from the Bolivarian Republic. Clashes were preceded by a protest against their arrival in the city.

In December 2017 government of Roraima due to the sudden influx of migrants declared a state of emergency, and in April of this year, the head region of MS Suely Campos appealed to the Federal Supreme court to seek the closure of the border with Venezuela, but to no avail.